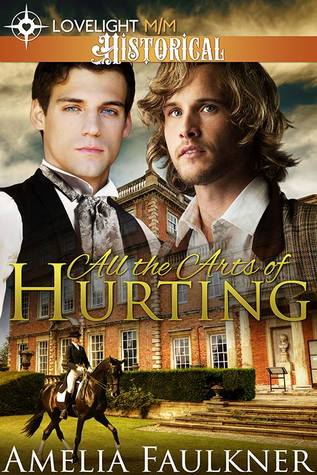 All the Arts of Hurting by Amelia Faulkner
–
Source: Review by Request
ARC provided by Author
My Rating: 4.5 of 5 Stars

As far as Lord Duncan Aldham is concerned, war is a thing which affects other people. He’s quite content to sit in the ancestral pile, ride his horses, and defend himself against his mother’s attempts to marry him off. So when Duncan meets the Manor’s new stable hand he’s thoroughly unprepared for the desire which the man ignites within him.

William Fossett is handsome, muscular, and utterly forbidden. A kind and gentle soul, William is a pacifist in a country which is about to force every man to test the strength of their convictions.

Confused by his yearning for Fossett, Duncan will soon be forced to work out whether he dare act upon this illicit attraction to another man – and to a Commoner, no less. But Fossett has bigger problems: the Military Service Act has been passed into law, and even absolutists are at risk of conscription…

Little I’d ever teach a son, but hitting,
Shooting, war, hunting, all the arts of hurting.
Well, that’s what I learnt,—that, and making money.
– Wilfred Owen (From the poem, A Terre)

I am such a sucker for Historical MM Romances, and this little novella by Amelia Faulkner was GOLD.

The pacing was a little fast, but that’s to be expected when you’re working with such a short format. That being said, there was no ‘insta-love’ between the main characters.

It was a slow and steady build up of their forbidden romance. The usual drama of hiding attraction was boosted by the dread of an escalating war and the Military Service Act.

This was no debauched lust for sin. It was love. Dark, illicit, heartbreaking love.

The story is told from the POV of Ducan, and he handled that responsibility beautifully – he had what I can only describe as an eloquent introspective style – the kind you’d expect from a Lord.

Duncan is the son of the tenth Earl of Trowbridge. His life is spent in luxury. War is tearing the world apart, but calm has descended on the opulent Trowbridge Estate now that the Earl has gone to battle and glory.

Let the Earl serve Queen and Country – Duncan wants nothing to do with either the war or his abusive father. All he has to do is fend off his mother’s plots to marry him off to a woman of good breeding.

Duncan has little use for those suitable women either, he’s perfectly content to spend his hours reading or riding.

He looked like a wild thing, his eyes dark with hunger and his lips swollen and wet. “This can’t go on or I’ll come undone.”

William is the new stable hand on Trowbridge Estate. With all the men of the country off to war and all the women flocking to fill vacated factory jobs, the Estate is operating on as little staff as possible.

Duncan is unsettled by his instant longing for the scruffy stable-hand. He knows he must never act on his dark desires, so he pacifies himself with friendly conversation. They begin riding together each morning, even though it’s inappropriate for Duncan to fraternize with the staff socially.

William is a gifted horse trainer. He apprenticed for stables and riding schools in order to educate himself about the animals he loves.

He’s a pacifist and completely opposed to the war, but with the recent Military Service Act it seems as though William will be forced to take up arms for his country regardless of his morals.

Just when Duncan and William were giving in to lust simmering between them, the threat of being drafted into a war neither man support hangs over their heads.

Opposing the war is treason.
Loving each-other is punishable by death.

There was quite a bit of nail-biting as the two men worked to find a way to stay together in the face of war.

I’d also like to mention that Duncan’s mother was a particularly interesting and surprising character over the course of the story. She went above and beyond my preconceived notions of a mother attempting to marry her son off. Absolutely delightful.

This story ended on a perfectly satisfying and realistic HEA. I was left grinning ear to ear.

This story is a stand-alone, but I’d love for Amelia Faulkner to revisit these characters (or even just the time-period) it’s ripe for more delicious storytelling.

Before the war, Trowbridge had boasted a fine collection of riding steeds, but many had since been provisioned to the Army as mounts for Officers. Only five remained. Duncan did his best to rotate through them so that they each received at least one bloody good run a week, but he had his own favourites, and on a day like today it was difficult to consider riding one of the more strong-willed beasts. It felt such a silly concern in a world where his countrymen were dying face-down in the mud.

He walked into the comparative darkness of the stable and was instantly enveloped in its warmth. The heat of the horses was trapped by brick and slate. He could hear their breaths and snorts, as well as the sounds of manual labour. Denham was likely here mucking out the stalls himself – a lowly task for a Stable Master, but one Denham undertook without complaint.

Duncan remained quiet a while as he waited for his sight to adjust and only once he was able to make out shapes in the dark did he progress deeper into the building, past Denham’s little office and to the horses proper, where he was confronted with the most breathtakingly beautiful sight he had ever witnessed.

The boy mucking out the stalls wasn’t Denham. Not by a long chalk. Duncan had no idea who he was, and in that moment it hardly seemed to matter. All that seemed relevant was that the lad was nothing short of angelic.

He wore trousers and boots, but his shirt hung from a nearby hook and left his upper body bare but for the sweat of labour which outlined his taut torso and muscled arms. Beads of moisture drew trails over the ripples of his shoulders. His long, wavy hair was darkened by wetness, yet the very tips remained almost golden. The boy shovelled shit and hay and yet he rose above it like an Adonis.

Duncan’s member, resolutely unmoved by the procession of women who had attempted to entice it, roused with startling eagerness. If the boy turned, if he saw… Duncan’s jodhpurs would betray him, make no mistake. They were tight, and he wore nothing long enough to tug down over the distinct ridge which snaked toward his hip.

He turned on his heel and escaped out into the bright, harsh morning light. There would be no ride this morning, and returning to the Manor was out of the question lest the staff catch sight of him in this state. A long walk around the grounds was the only solution.

Duncan took stiff, stilted strides away from the stables, and his mind fell to panic.

What the devil had just occurred?

Amelia Faulkner was born in the rolling green countryside of Oxfordshire, and moved to London once she was mostly grown up. She has a degree in Computer Science, and spent quite a long time working with computers until her childhood love of writing could no longer be ignored.

Since then she has written for corporate clients and personal pleasure, and finally stepped away from office-bound working in 2011 to freelance from home.

Amelia is also a keen photographer and film-goer, and resides in the city (not the City) with her husband. She is notoriously camera-shy.