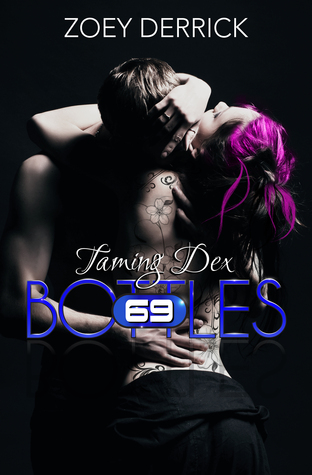 Taming Dex by Zoey Derrick
–
Series: 69 Bottles #4
Source: Review by Request
ARC Provided by the Author
My Rating: 4 of 5 Stars

Dex Harris, Drummer for America’s Hottest Alternative Rock Band 69 Bottles, has never gone looking for love—for good reason. After an ill-fated night after a tour stop in Phoenix, his wicked demons resurface. Is he strong enough to resist falling back into the black hole that was once his life or will he let addiction consume him?

Raine Montgomery has worked for Bold International, Inc since she moved to California at eighteen. She’s fought her way into the executive offices as an assistant to CEO Cami Michaels, but being an assistant isn’t what she imagines doing for the rest of her life—so when Cami sends her to assist with the 69 Bottles tour, she jumps at the opportunity.

There’s only one kink in that plan—and his name is Dex Harris.

Raine doesn’t expect to be on the radar of the sexy manwhore drummer, let alone the center of his sights. Shattered from a long-term relationship with a cheater, Raine is determined to make Dex prove himself.

Will Dex toss away his one-night stands in favor of sleeping every night with only one woman—or is Raine simply his latest conquest?

A Rock Band. A Tour Bus. One Wild Ride…

“You’re going to shatter me,” I say quietly.
He stills.
Our eyes meet.
“You’re right,” he agrees.

Even though this is the fourth book in the panty-melting, swoon-worthy, smile-till-your-face-hurts 69 Bottles series, this book can be read as a stand alone… HOWEVER, there will be a pile of spoilers for the first three books should you read Taming Dex first.

My Personal Advice: The first book in this series, Claiming Addison, was a five-star read for me, and you’d be missing out on something really special if you skip the first three books. They tell the MMF Romance which unfolds between Talon Carver (The lead singer for 69 Bottles), Kyle Black (The Band’s Manager), and Addison Beltrand (69 Bottles’ new PR rep). I fell in love with this series early in the first book, and you will too!

OK, back to Raine and Dex who are the stars of this book…

What the fuck? It’s like I’ve gone from one night stand to love struck puppy. Nope, so not going to happen.
[…]
It’s almost as if somewhere in the back of my mind, I know that I cannot simply fuck this girl.

So here’s the thing… Dex is an asshole.

He’s an unapologetic playboy and I wanted to kick him in the balls more than once while reading this book. I think it speaks to the talent of Zoey Derrick, that my opinion of Dex was completely different once I finished the book. He grew and matured and fell hard. His character progression was a joy to watch.

Also, it helped that Raine kicks him in the balls and I got to live vicariously through that fabulous moment. I liked that.
A lot.
Sorry Dex 😉

Dex struggles with his sobriety, and with the idea of fidelity. Even when that one chick comes along and knocks him on his ass, he still can’t stop fucking it up…

They say that our eyes are windows into our souls and hers were wide open, ready, wanting and willing to surrender to me. Normally I’d shrug it off, I’ve seen the look before, but it was almost as if our two souls were sliding into one. Two halves becoming whole for the first time in my life.

Fans of the series have met Raine before, she’s the personal assistant of Bold’s CEO. With Addison’s rising stardom, Raine is sent out on the road to assist with all the PR business surrounding the band.

Much like Addison, Raine became single-mindedly focused on her career as a way to distance herself from a personal tragedy – you’ll have to read the book to find out the darkness that haunts Raine, I’m not spoiling anything 🙂

Raine is wonderfully pragmatic, but even she isn’t immune to the sex that practically drips from Dex. She figures she can have one night with the drummer of her dreams, get it out of her system, and do her job… He thinks he can treat Raine like any other disposable woman who has landed in his bed.

They were both so wrong…

Dex cant shake the feeling of ‘right’ when he thinks about Raine, but he constantly sabotages himself because he feels he’s unworthy… and that’s why I found it hard to fall in love with Dex. I just wanted to shake some sense in to him!

Raine refuses to make things easy for Dex. She tells him flat out that he’ll have to work to earn her affection. YOU GO GIRL!

These are two beautifully flawed characters with a great deal of baggage to work through in order to make a relationship work. Dex buried himself in music and women to escape his demons. Raine poured all of her energy into her career.

We left of on a Happy for Now moment between the couple. There’s still a lot more in store for Dex and Raine, and we’ll be catching up with them again in Devouring Raine which is due out later this summer.

He comes over to me on his knees, and I cup his cheeks and kiss him. He doesn’t linger there before he starts kissing along my jaw, down my neck, across my shoulder, kissing the points of my wings as he goes. He swaps licks, nibbles and kisses down my chest, avoiding the one place I desperately need him. I groan in frustration and he smiles like a Cheshire cat. “What do you want, princess?”

I grab my aching breasts in my hands and watch as his face lights up at the overflowing swell of them and he gently sucks a nipple into his mouth. Licking, flicking and sucking on it like his life depends on it. His other hand comes up to play with the other nipple and I moan.

He kisses across the swell to my other nipple and sucks it into his mouth, teasing me. “You’re torturing me,” I whisper and he smiles as he bites my nipple. I yelp and start laughing. I fall back on the bed.

“Now that’s a beautiful sight,” he says as he lifts my legs over his shoulders and before I can balance on my elbows, his tongue swipes against my sex.

“Ahh, fuck,” I groan and put my hand in his hair, holding him to me, grinding my pussy against his face and he doesn’t stop. He’s licking, circling, sucking and then I feel him slide a finger inside me. He quickly finds the spot that lights me up like nothing else and my legs start to shake.

His mouth comes away, but his finger doesn’t stop. He slides another one inside and I begin to fuck his fingers. “It is my goal to make you come like last time, as many times as humanly possible,” he breathes. His hot breath is caressing my sex; my clit is a ball of overwhelming sensation.

“Please,” I whine and his mouth is back on me in a second. He doesn’t let up licking and sucking on my clit. Occasionally his teeth graze my stiff nub and I writhe. My orgasm is building, simmering just below the surface. “Fuck. Dex…” I practically scream as my orgasm overtakes me. My body shakes with the release he so desperately wanted. The warm rush of fluid slides past his fingers and he groans into my pussy. He slows his motions, letting me ride out the rest of my orgasm. Book Five of this phenomenal series is due out July 21st, 2015 and will continue the story of Dex and Raine.

For the FIRST TIME EVER – You can grab a box set containing the first three books in the 69 Bottles series. In addition to the first three novels of this fabulous series, this Box Set Includes a 3 Chapter Sneak Peek at TAMING DEX – The set is currently on sale for just $2.99 through June 10th- it will be $7.99 at full price.

It is from Glendale, Arizona that Zoey Derrick, a mortgage underwriter by day and romance and erotica novelist by night, writes stories as hot as the desert sun itself. It is this passion that drips off of her work, bringing excitement to anyone who enjoys a good and sensual love story.

Her stories are hopeful yet true to life, skillfully avoiding melodrama and the unrealistic, bringing her gripping Erotica only closer to the heart of those that dare dipping into it.

The intimacy of her fantasies that she shares with her readers is thrilling and encouraging, climactic yet full of suspense. She is a loving mistress, up for anything, of which any reader is doomed to return to again and again.