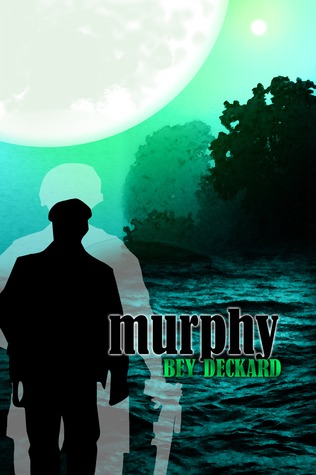 Murphy by Bey Deckard
–
Series: F.I.S.T.S #2
Source: Review by Request
Copy provided by the Author
My Rating: 4.5 of 5 Stars

Sometimes when it seems like it’s too late, the right person comes along and opens your eyes…

Murphy is the continuing story of a D/s relationship between two Space Marines who found each other in the midst of hopelessness and misfortune.

Sarge and his newly minted squad travel across the galaxy on a top-secret mission that could help win the war. However, to Murphy something about the mission stinks, and it’s not just the planet they’ve landed on.

Welcome to the swamp…

He rescued me, my boy. From myself, mostly. And, you can bet your ass that from now until forever, I’m going to make every single goddamn second count.

Murphy continues the story of two Space Marines who forged a relationship in the trenches of a distant planet. I loved the first book, and I’ve been impatiently waiting for the followup. I’m pleased to say that the sequel was even better than the debut!

Sarge ended in a shamelessly dramatic cliffhanger. Murphy was on the edge of death as a result of wounds sustained during battle. The story ended as he and his Sergeant were waiting to be airlifted to safety.

That’s probably why I prefer to binge read series rather than subject myself to what seems like an endless wait for subsequent releases. Ah, but the the great thing about the F.I.S.T.S. series is that the stories are short enough to do a quick re-read to refresh my memory before diving into the next book 🙂

Bey Deckard is taking advantage of the serial format to layer in fabulous detail and interesting military plot-lines. The relationship between Sarge and Murphy is still evolving. There is an emotional attachment which is increasing, plus all of the lovely D/s elements from book one are still being explored.

Happy? Hell, I’ve never been happier or felt more at peace than the months I’ve spent at Sarge’s side.

Murphy survived the battle at the end of Sarge – Obviously. I mean, the book’s named after him… – Murphy got to keep his life, but he lost his leg. Luckily for everyone, the cybernetic prostheses in this universe are top notch, so the loss hasn’t slowed the big guy down.

In addition to his new leg, Murphy also earned himself a new rank – Private First Class Andrew Murphy is now Sargent Murphy. His new rank as officer means nobody batts and eye at him sharing a room with his commanding officer…

But that doesn’t stop the gossip around the base. Everyone seems to know what’s happening between Murphy and Wilkes. Not just the relationship, but also the kinky nature of their sexual exploits as well…

As his grin gets a little wider, I’m struck with just how much trouble I’m in. My career has always come first. Always. What the hell are you supposed to do when something else becomes more important..

There’s something supremely satisfying about watching a tough man fall hard, and that’s precisely what we’re seeing in Sarge.

Good ol’ Sargent Wilkes earned himself a promotion between books; he’s now Master Sargent. In addition to the new rank Sarge also earned himself a bit of a military prison sentence. He’s serving his time piecemeal for crimes committed during the final battle in the last book.

Wilkes’ punishment isn’t the only thing rubbing him the wrong way about his military service. It seems the powers that be are making top secret plans to send Sarge’s unit back into battle against the alien enemy.

It’s all very hush-hush, and even though Sarge doesn’t know the details of the mission, he’s more than certain that his unit is underprepared for battle – budget cutbacks, and poor equipment have Sarge cursing the day the military became privatized.

The universe seems to be falling to hell all around them, but Wilkes and Murphy are snatching moments of peace where they can. Usually with each other, and usually involving Murphy on his knees and begging.

We retained the dual POV aspect from the previous book, and I’m loving the insight into these men. Wilkes is an especially entertaining character to read – one of those ‘still waters run deep’ type of men. He’s tight lipped about his emotions, but his internal monologue has no such filter.

Bey Deckard was kind enough to spare us from the emotional trauma of another cliffhanger, but there is endless potential in this series. I’m looking forward to meeting up with Wilkes and Murphy again in the future!

“The next words out of your mouth, so help me god, better be ‘I know I am grossly unsuited for any goddamn top secret mission because I am burdened with the inability to keep my goddamn trap shut.’ ”

Rudyck takes two quick breaths through his nose before answering me. Yeah, he knows exactly what I’m getting at.

“You’re off the squad indefinitely. In fact, I’ve asked to have you transferred to… ah…” Murphy’s in my line of sight, so I see it when he looks up at me. His expression is thoughtful. There’s no reproach, just quiet, keen intelligence in those serene eyes. I suddenly feel petty in comparison and decide right then not to send Rudyck to the deep freeze like I’d intended. “Another ship,” I finish lamely. “You’ll be assigned to something more suitable to your expertise.Dismissed.” I just want him out of the fucking room.

Rudyck snaps me a salute even though private rooms are categorized as “indoors” on the old starcruiser.

When the door closes after him, I turn to Murphy. He’s gone back to his book, but though his eyes are moving, I get the sense that all his attention is focused on me.

A smile tugs at the corner of his mouth, dimpling his cheek, and he glances up.

“Thanks, Sarge,” he says. I catch a hint of amusement buried in the gravel of his voice.

I shake my head. He’s not thanking me for the display, that’s for shit sure.

“That kid deserves to freeze his ass off with a spell of deep space watch duty… You’re goddamn soft, you know that?” I grumble and give my face a rub. “And you’re making me goddamn soft.”

As his grin gets a little wider, I’m struck with just how much trouble I’m in. My career has always come first. Always. What the hell are you supposed to do when something else becomes more important?

I turn my back on the gorgeous boy sitting on the bed, and I awkwardly grab for a pair of shorts.

I have to look at him because of something I hear in his voice. Murphy’s still slouched on his side with his back up against the wall and one elbow dug into the mattress. He’s wearing a white T-shirt with a worn-out pair of navy pants that look like they came from an old C-99 Horus flight suit, and he’s barefoot. He looks rumpled and relaxed stretched out on the bed, and there’s a gentle sort of confidence in his expression as he stares up at me.

Like hell, you will. I clench my fist tighter around the black shorts. No, I just need to get away for a bit. Shake him out of my system. Get back to what’s important.

“All right,” I say instead. “Grab your shit and let’s go.” I watch him mark his place in the book before sliding off the bed to put it carefully away in the little corner unit. As he bends over to grab his workout gear, I shake my head. That perfect ass…

Yeah, who the fuck am I kidding? I can’t hide anything from him—I want him with me, and I’m glad as hell that he’s joining me. That’s the damn truth.

Born and raised in a small coastal town in northern Québec, Bey spent his early summers on his uncle’s boat and running wild on the beaches of the surrounding islands, lighting fires and building huts out of driftwood and fishermen’s nets. As an adult, he eventually made his way to university and earned a degree in Art History with a strong focus on Anthropology. Primarily a portrait painter and graphic artist, Bey sat down one day and decided to write about the two things that he felt most passionate about: sex and the sea.

Bey currently lives in the wilds of Montréal with his best buddy, a spotty pit bull named Murphy. Caged: Love and Treachery on the High Seas is his first novel.