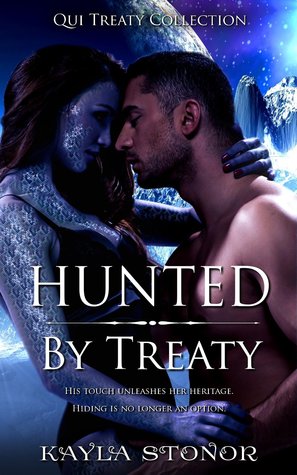 His touch unleashes her heritage. Hiding is no longer an option.

After decades of war, the Qui Empress ushers in a new era when she takes a human tribute as her price for a peace treaty with Earth. She orders the surrender of all human prisoners of war.

Butchered and broken, Raiss Tyrone has escaped his K’lahn captors and is running for his life. The arrival of a Qui warship in orbit sparks an intense man hunt. A K’lahn garrison is out in force, chasing him down. His only hope is a strange, insecure half-breed woman, part human, part K’lahn.

Crendea has never come to terms with her shape shifting affliction, a genetic aberration from her K’lahn father. She lives with the shame, terrified of exploring the full extent of her heritage. Now a single look from Raiss Tyrone, lust in his eye, and her sparkling lizard scaling bursts forth. His delicious scent and warm touch ripples a terrifying change across her body, and neither of them are prepared for the genetic frenzy they are about to unleash.

This sexy romance tale is the third story in a collection inspired by Under By Treaty, a science fiction romance in Kayla Stonor’s Surrender collection. Each tale in the Qui Treaty Collection is a standalone short story or novella set in the Qui galactic empire, with annihilation of mankind held at bay only through the Treaty consummated between the Qui Empress and the human consort abducted under its terms.

Best book in the series so far!

Few accepted her presence without gawking at her like an abomination. Half the K’lahn garrison expected her to whore for them and the majority of the town assumed she did.

The lonely truth assaulted her once more. No one touched her, K’lahn or human, and those who tried were not the sort she wanted in her life.

Hunted by Treaty is the third book in Kayla Stonor’s amazing Qui Treaty Collection series. We’ve been treated to space ships, interplanetary feuds, and all manner of kinky alien fun, but this book set itself apart for several reasons:

1. We spent the majority of the book on an alien planet rather than a spaceship – the challenge of creating an exotic alien world was wonderfully achieved.
2. The MCs were on the run which increased the suspense factor and kept me completely engrossed in the story.

She prayed she could keep this courageous man out of the Qui’s clutches. He had suffered enough.

Raiss on the run. He managed to escape the alien force looking for him across the galaxy, but he might not survive the chase much longer.

There’s a Qui warship hovering over the planet he’s hiding on.
He’s gravely injured, infection and fever are setting in.
There’s a price on his head.

With no allies and no place left to run, it was looking pretty hopeless…
Until a stranger shows him mercy…

The more he explored the lizard in her, the more he drew her animalistic urges to the fore. He excited her, awakened her to the true nature of her inner Qui.

Crendea is an unlikely savior. She’s a half-breed K’lahn/Human. When the K’lahn forces invaded Earth for the first time, they captured humans. Everyone believed the humans taken were simply killed by the barbaric invaders, but that was not the case.

The captives were taken to a mining planet several light years away to be used as slave labor. Now the third generation of these humans are running the mines. The new Qui Treaty has ensured fair treatment for the humans, but animosity still lingers for a population ripped from their home-world.

On a planet filled with former captives weary of the aliens they work with, Crendea is forced to the fringes of society. She’s ashamed and resentful of her half-breed DNA. She’s half K’lahn, half human, but she’s never been fully accepted into either culture.

She has little control over her shape-shifting abilities. Scales appear like a rash in times of stress.

Few have ever accepted Crendea or offered her friendship.
No one has ever thought of her as desirable or worthy of love.
Until one injured fugitive shows up on her planet and knocks her off balance.

He’s running for his life,
She’s running from her heritage,
They find love and acceptance in each other’s arms…

Together Raiss and Crendea race across this alien landscape searching for refuge. There’s quite a bit of action and suspense with this one, plus a heaping helping of will they or won’t they…

I absolutely loved this episode of the Qui Treaty Collection. There was an intriguing segue into the next book, and it has me eagerly looking forward to meeting Zeus!

Suddenly, fingers gripped his wrist, powered his arm over and above his head and pinned him down. He twisted beneath her, trapped. Her alien eyes glittered above him. Her pert breasts danced just above his mouth and he tongued a nipple in passing as she set up a punishing rhythm, rising up then pressing down, tighter and tighter. Her vaginal muscles clamped around him.

Too tight. Her touch became painful. Trapped him inside her. Her aggression increased. He couldn’t release his wrist.

“What?” she breathed. She didn’t stop. So strong. A wild creature, caught in an impassioned frenzy.

“Please… Relax! Try to relax.” In a stricken moment, he pushed at her with his handless limb, cried out with pain.

She launched back. The pressure eased, and then she was raining kisses on his face.

“I’m sorry, I’m sorry.” She was lifting away. “I thought…  this is how… I needed to bear down, it felt so natural. I didn’t know I would hurt you!”

She freed his hand, readying to leave him, her channel slippery and gentle, responsive. Lust surged back in the wake of his panic.

She hesitated, rested her forehead on him, her long eyelashes almost brushing against his, her long locks of hair falling around them both. “I have never experienced these feelings, this insanely powerful urge. I could feel you inside me and it was so wonderful to squeeze you. It’s like I could feel every part of you….”

“Maybe the lizards have armored dicks, too.”

Crendea did not respond, and then she was off him, leaving his cock wet and waving in the air, engorged with blood and aching for her. He pushed up on his elbow and watched her grab a sheet and shoot out of the room.

“Fuck.” He scrunched his eyes shut. He thought his arm was bad. She’d left him with a never-say-die erection, hard enough to drive a man insane. Rolling out of bed, his aching arm tucked into his side, he pulled back the open door and spotted an open window leading to a small roof terrace.