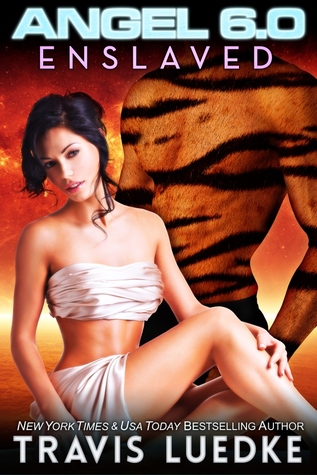 The product of illegal genome experiments to perfect the human race, my name is Angel, and I live with a slave collar, a tracking system I can’t escape. Torn from my lover’s arms and shipped across the galaxy, I am enslaved to the Gran, a fierce alien Catlike race of warriors. I serve as Captain Cronin’s concubine, and pray Cesar, my pirate lover, finds a way to beg, steal or barter my freedom.

Trying to salvage an existence among the Royal Family of the Gran, I find friendship and new allies in my bid for freedom. As translator, I have a chance to broker trade between Cesar and the Gran. Success might free me of the slave collar wrapped around my neck.

If not, I will surely go mad kneeling before the Captain, serving him in ways I dare not admit to Cesar. I pray my pirate lover never learns the truth of the wicked things I do to please Captain Cronin.

It didn’t matter if he wanted to hurt me, He’d already destroyed me when he took me from Cesar. Physical pain was nothing more than pleasure to my twisted nervous system.

Ripped from her happy little reprieve with Cesar, Angel finds herself returned to her position as concubine to Captain Cronin, the ruthless pheromone addicted captain of The Gran.

All she has to do is survive for ninety days and she’ll be able to see Cesar once more. Luckily, Angel was genetically engineered to survive. The wounds inflicted by the Captain heal at an astonishing speed. A lesser being would surely be ripped to shreds and die from their injuries, but not Angel.

Survival is easy,
Keeping her loneliness at bay is much more difficult…

The best thing about this book?
Captain Cronin’s ship docks with a Gran space-colony and we get an up-close and personal lesson in Gran culture – It was mesmerizing.

Seeing the exotic and technologically advanced Gran society through Angel’s eyes was an absolute joy.

Angel is brought to the negotiating table as translator, though it’s obvious that the majority of The Gran are less than thrilled about her presence. She winds up reluctantly making friends with a young Gran male and later discovers that he’s the son of The Gran Emperor. When a twist of fate has Angel playing rescuer to the crown prince, she’s invited to stay in the royal palace.

Angel’s only knowledge of Gran culture came from limited human databases and what little she gleaned while sexually satisfying Captain Cronin. Needless to say, the royal family are able to provide a wealth of information.

The Emperor, his wife, and two children are quite taken with Angel.

Can she convince the Emperor to grant her her freedom?
Will she return to her beloved Cesar without a tracking collar firmly fastened around her neck?

I suppose you’ll have to read the book to find out!
😉

Captain Cronin reached out and brushed my arm, almost absentmindedly. Cesar’s eyes caught the movement and pegged me hard. I pretended I didn’t notice the gesture. I had no desire to explain to Cesar or anyone else the true nature of what the Captain and I had shared.

The Captain’s body language gave me the impression he was finished, ready to leave. He addressed Cesar in closing. “I accept your proposal. Make preparations for your trade offers. I must speak with the Trader’s Guild. Bring your industrialists here. We meet again on our next visit to Nugene.” I mentally did the time crunch and realized he was talking about 90 days. The Gran showed up at Nugene Station every three months, like clockwork, to pick up new shipments of their worker drones.

Elation filled me as I flipped the Captain’s words to English for Cesar. We did it! We pulled it off, with nothing more than a few lines of bullshit and a straight face! My stupid grin refused to go away. No matter how hard I tried to keep from smiling, my lips kept tipping up with the overwhelming joy flooding through me. I looked to Cesar’s solemn business-like face and saw the pleasure hiding in his eyes.

Cesar put out his hand out to shake on the deal, and I batted his hand down. “They don’t shake.” I inclined my head in a little half-bow, and Cesar mimicked me. Then he grabbed my hand.

The Captain’s eyes sharpened on our joined hands and a small growl slipped out between his fangs. “Angel bears the mark of the Gran.” The Captain’s large, powerful hand slipped around my throat to stroke the metallic collar marking his property. He tapped his claws on my collar, sinking his point home. “Angel is my personal assistant. She is a valuable female and serves me well. She will present your trade offer to the Emperor and the Traders Guild.”

My happiness fled and suddenly the room felt lighter. Breathing became difficult. My knees weakened as my world tilted sideways. The Captain’s claws gripped my arm hard and he pulled me in close, keeping me from falling on my face with the powerful rush of vertigo.

He was taking me, again. He wanted me with him, aboard his ship, as his personal assistant.

Cesar realized his mistake and had no choice but to let go of my hand as the Captain pulled me in closer. It was too late and probably never mattered anyway. I could tell by the Captain’s smug satisfaction that he’d intended this all along, regardless. The Captain had come to rely on me to feed his addiction with my body, my pain, my foolish willingness to please him.

Maybe if I’d fought him before, if I’d never submitted to the Captain’s debasement, I might be a free person right now, able to live with Cesar, able to enjoy a normal life. But I hadn’t fought the Captain when he sprayed his pheromones all over me and did things that I enjoyed far more than I should have.

My willing submission had entrapped me in a deal of my own making.

As the author of the Nightlife Series novels, Travis lives very vicariously through his writings. He invites you to enjoy his macabre flights of fancy, but be warned: The Nightlife Series is violent, sexy, and occasionally violently sexy.