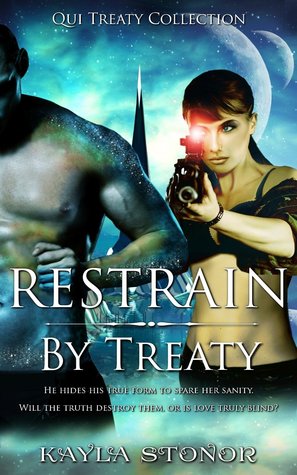 He hides his true form to spare her sanity. Will the truth destroy them, or is love truly blind?

After decades of war, the Qui Empress ushers in a new era when she takes a human tribute as her price for a peace treaty with Earth. She orders the surrender of all human prisoners of war.

Ardant’s mission is to retrieve Captain Bea Solomon and bring her safely home. He finds Bea at the mercy of a flesh dealer, so mistreated that the sight of Ardant’s winged lizard form terrifies her. To gain her trust and rescue both her mind and body, Ardant makes a decision that traps him in a lie.

Bea recovers in his care, blissfully unaware her savior is not the man she is growing to love. Ardant is Qui, a member of the shapeshifter alien race who once ordered the decimation of Earth. Attractions collide, pheromones explode, and Ardant clings to his human form by the shreds of his failing willpower. At his wit’s end, he enlists Bea’s help to restrain his baser needs… but this Captain enjoys having a handsome man bound and at her mercy.

As passions rise and Ardant’s deception fractures, he faces the approaching reckoning. For no restraint can protect Bea from the devastating truth waiting to destroy her delicate peace of mind.

If helping you face your fears heals the wounds carved on your soul then my burden of guilt is lightened.

If you’ve not yet discovered the fascinating and delightfully kinky Qui, you are missing out my friend!

A brief recap for those new to the Qui:
Earth has been at war with an invading lizard-like alien species called The K’lahn for generations. Earth was hopelessly outmatched by the invading alien force. In an effort to cease hostilities, Earth offered their decorated General, Trey Jaden, as a sacrifice – a sexual submissive to the mysterious Empress of the Qui Empire.

As a result of General Jaden’s actions in Under By Treaty (which are too glorious and spoiler-y for me to post here, so you’ll just have to read it for yourself) a peace treaty was drafted between Earth and the Qui Empire.

This novella is the second episode in the Qui Treaty Collection, which details the rescue of human POWs taken during the interstellar war. After the treaty was signed, The Qui Empress sent out her most trusted diplomats to locate and liberate the humans who had been captured.

Each book in the series follows a new pair of characters, but all the stories intertwine beautifully with the overall narrative.

This is the story of Captain Bea Solomon.

She despised the pathetic, hopeless person she had become, a person the K’lahn created. She hated the K’lahn. She hated every despicable lizard alien that ever existed.

Bea did not end up in an alien prison like most soldiers. She was sold off to flesh traders and taken to a brothel. She was brutalized, raped, and repeatedly beaten during her time as prisoner.

Life as a soldier taught Bea to despise all aliens, and her time as an unwilling plaything has solidified a deep hatred and fear. This woman has metaphorical balls of steel – such a fascinating character. When her rescuer first shows his lizard-like alien face, Bea fights him with all she’s worth, and immediately earns his respect and devotion…

The Empress made Bea Solomon his responsibility and there was nothing he would not do to help this courageous woman recover her dignity.

Ardant is in over his head with this mission. When he first finds his charge broken and battered in an alien brothel, she is unwilling/unable to distinguish him from the enemy. Ardent is amazed by how much fight and fire still exists within the small human woman. A lesser being would have died as a result of their injuries, but Bea seems to have survived on the power of her hatred alone.

The shape-shifting Qui takes on a human form and rescues Bea from her prison. He resolves to hide his true form from Bea for the duration of their journey. He knows that exposing himself as Qui would compromise his mission – to return Bea to her comrades healthy and whole.

It’s a long trip back to the Qui home-world for the two of them. They’re alone together on the ship, and as a trust and camaraderie builds between Bea and Ardent, so does a sexual attraction which both parties are working hard to ignore.

Ardant has the technology to heal the physical scars, and the patience to help Bea heal the mental ones as well.

Ardent is more than happy to surrender that control.

This was a wonderfully sexy addition to the Qui Treaty Collection. Bea Solomon is nothing short of glorious. Such a fabulous read.

In addition to the sizzling sexual dynamic being played out between our MCs, the pair had to contend with ship malfunctions, alien interference, and of course, Ardent’s secret heritage lurking in the background…

The solidity of the bracelets around his wrists instilled Ardant with a vulnerability that deepened under Bea’s assessing gaze, and the knowledge of the punishment awaiting him if his concentration slipped. When Bea opened his shift tunic and exposed his chest, his nipples hardened, a reaction to both her presence and the chemicals intoxicating the air. He reached up to divest her of her clothing, but she brushed his hand away, a clear signal that he had no more say in the matter.

She owned their pleasure and he trusted her to take good care of him.

Not having to think, allowing Bea to take the lead, allowed him to tune in to his body’s responses. He willingly let her turn him around and strip him of his shirt. His muscles twitched at the rough handling, but when she twisted one arm behind him, blood rushed into his testicles, infusing his body with a glowing warmth. He willed her to subdue him quickly. Once she had him secure, he would be helpless, under her command. He heard the click of the chain connecting to a cuff and bowed his head. Every detail magnified in his mind. When she grabbed the fingers of his other hand, his knees nearly buckled, she controlled him with a resolute touch, her precise actions those of a trained soldier. Captain Bea Solomon could break his human body for real.

She chained his wrists behind him so tightly his heart thundered in his ears.

This woman made him lightheaded.

His Qui battered for escape.

Bea spun him around to face her, dug her fingers in behind his belt, and pulled him with her to his bed where she threw pillows into a pile. He sighed with relief when she turned her attention to unfastening his belt. Gentle kisses on his stomach teased him, drove him crazy. She had a brief tussle to release his desperately hard cock and then he stood proud and free. His pants dropped over his boots and transformed into a cruel restraint designed to nudge him off balance.