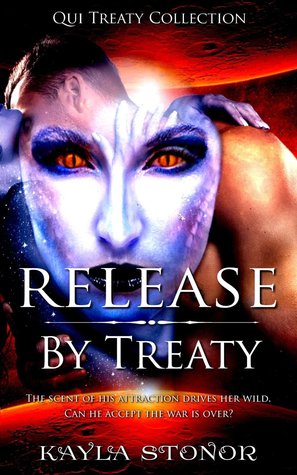 The scent of his attraction drives her wild. Can he accept the war’s over?

After decades of war, the Qui Empress ushers in a new galactic era when she signs a peace treaty and takes a human consort. She orders the K’lahn, the Qui’s warrior class, to surrender all human prisoners of war.

Hand selected by the Empress, Dol’ce is tasked with the mission to retrieve Colonel Abe Marcel and bring him home. Having lost his entire combat unit, Marcel is barely surviving K’lahn imprisonment. Dol’ce delivers him into the safety of her ship, and through delicate care, nurses his soul and body back to health. But his savior is a member of the Qui, a sophisticated alien race of shape shifters who rule a galactic empire, the very same Qui who once ordered the decimation of Earth. Dol’ce has never met a human before and the overpowering call of Marcel’s unruly male pheromones unleashes havoc on her senses. Her exotic beauty and powerful desire leaves him with a hard problem only she can relieve.

Marcel must accept that the war is really over, or lose the alien glittering gem who saved his life.

This sexy scifi romance tale is the first in a futuristic collection inspired by Under By Treaty, a space opera romance in Kayla Stonor’s Surrender collection. Each tale in the Qui Treaty Collection is a standalone novella set in the Qui galactic empire, with annihilation of mankind held at bay only through the Treaty consummated between the Qui Empress and the human consort abducted under its terms.

Let’s recap for those who are new to the Qui:
In this universe Kayla Stonor created, Earth has been at war with an invading lizard-like alien species called The K’lahn for generations. The war has been ongoing, bloody, and Earth is hopelessly outmatched by the invading alien technology. In an effort to cease hostilities, Earth is offered General Trey Jaden as a sacrifice – a sexual submissive to the mysterious Queen of the Qui.

As a result of General Jaden’s actions in Under By Treaty (which are too glorious and spoilery for me to post here – you’ll just have to read it for yourself) a peace treaty was drafted between Earth and the Qui Empire.

That’s where we come in with this story – The prisoners of war which have been captured over the course of the war are to be located, liberated, and returned to their home world.

He had every reason to hate her. To him she was nothing more than a marauding K’lahn that had ransacked his planet and warred with his people for decades. She was no different than the enemy who had tortured and murdered his friends.

Dol’ce has been tasked by the Qui Empress to track down a retrieve POW Colonel Abe Marcel. She is honor-bound to fulfill her duties, but she’s certainly not looking forward to it. She’s had very little interaction with the human race, and isn’t sure what to expect once she extracts her charge from a K’lahn prison.

Dol’ce is shocked at the state she finds Col. Marcel in. Dirty, emaciated, and broken – there’s no way she can return the Colonel in that condition. She resolves to get him into perfect health before delivering him to the Qui Empress.

The journey home in cramped quarters with the human is driving her mad. The scent of his pheromones triggers a wave of lust she’s helpless against. Despite Marcel’s obvious attraction, he’s loath to fall into bed with the enemy…

He knew she wanted him and perversely that knowledge turned him on. In fact, he suspected that she wanted him twenty four seven, to the point that she literally cut herself off from contact with him to deal with it.

Col. Marcel did not fare well as a POW.

He wasted away in his cell, listening to the cries of his team until there was nothing but silence to keep him company. He’s the last remaining member of his platoon, and the guilt of leading his soldiers to their deaths weighs heavily on Col. Marcel’s shoulders.

He has a hard time believing the Qui Ambassador who pulls him from his prison. She mends his broken bones and sets out to help him regain his strength. He’s not sure he can trust Dol’ce or her claims that the war between Earth and the K’lahn is over. She seems genuine, but Marcel knows better than to trust the enemy…

The beautiful blue alien is testing the limits of his control.

SPACE UST!
Wait… Is that a thing?
It is now!

This installment is far less kinky than the novel which proceeded it, but it is no less sexy or entertaining. This is a novella which packs quite a punch despite it’s short length – about 60ish pages.

I love that we’re getting these side stories from Kayla Stonor – the world she created in Under By Treaty was wonderfully detailed and extraordinary. I look forward to reading more delicious alien sex in this fabulous space saga!

Marcel winced. She was putting out that damn smell again, that cinnamon spice cocktail that turned his cock into a rampant flagpole distraction until he took direct action to relieve the ache. His frequent need to visit the bathroom embarrassed him. The thought of mating with a K’lahn lizard drove him insane. So she was blue, with yellow lizard eyes, and skin covered in tiny little sparkling scales. The woman also had the tightest ass he’d ever seen, curvy handful breasts with dark blue pebbled nipples, and he could only imagine the things she’d do for him with that long, wicked tongue of hers that darted out to wet her lips.

Blue luscious wet lips, she breathed hard like she was about to pop off right there in front of him. She stared, unblinking, lizard fuck-me eyes. She wanted it bad, and he wanted to give it to her, but he just couldn’t do it.

He jolted himself from the sexual spell she constantly cast over him and focused on his revulsion at the idea of screwing a lizard. No act could betray his men more viciously.

Commander Jeremiah Smith, combat pilot and asteroid belt navigator extraordinaire served with Marcel’s sister, until the K’lahn shot her down. Smithy and his sister both deserved better. Then there was Lieutenant Eustace “Zeus” Windsor, direct descendant of British Royalty and expert K’lahn exterminator. Zeus would murder Marcel for even considering the idea, as would Raiss Tyrone, a deep thinker who could turn a quarter into a lethal weapon. Marcel vaguely remembered Tyrone screaming that the K’lahn had chopped his hand off. He couldn’t be sure. Everything in that hell hole merged into a dark haze. Captain Bea Solomon had stopped screaming first. A United Regions Marine and brilliant engineer, she was the toughest woman he’d ever fought with, forever berating the boys for thinking with the wrong head.

Got that right, Bea.

A black depression seeped out of his memories. He let Bea down. Let them all down. Colonel Abe Marcel, decorated officer, led the best team he could have asked for into an ambush.

They’d sworn to go down together. Never submit to the enemy. Never.

Every illicit moment taking pleasure from a lizard sullied his team’s sacrifice.

None of that conquered his need to kiss this magical creature’s lips as she leaned in to him. The craving consumed him, twisted his perception and dulled his mind in a roaring rush of need.

His head dipped to meet her and time slowed. The bass hum of the ship’s engine faded into the distance. She tasted of sweet burnt caramel, so hot his blood raged through his veins. The urge to bury his ramrod shaft inside those soft delicious curves disintegrated any shred of integrity.

Grasping Dol’ce by the throat, he rammed her against the wall and assaulted her tasty mouth with a vicious tongue. He veiled his guilt with anger, as if violence could justify his lapse in decency. She didn’t resist at all. Her intoxicating aroma filled his nostrils and accelerated his descent into gratuitous debauchery. With his free hand, he grabbed her by the waist and tested the feel of her firm belly against his cock.

She planted her hands against his chest and retaliated hard, rolling him back to the wall and deflecting his fingers from her neck in one aggressive move. He continued the momentum and they switched dominant positions until Marcel slammed her onto his sleeping platform. He kneed her leg aside, fumbled for the fastening to her pants, and couldn’t find it.

Frustration gave way to a brief moment of clarity. He rose up and looked down on a woman with reptilian eyes and glistening skin dusted with diamond-shaped scales.