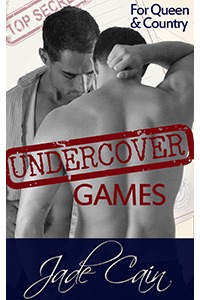 Undercover Games by Jade Cain
–
Series: For Queen & Country #2
Source: Review by Request
Copy Provided by the Author
My Rating: 4 of 5 Stars

Nick Kaplan and Aidan Blake are experienced secret agents, stars of MI-5… or they were until they moved in together and became lovers all in one fell swoop. Now, before they have a chance to work out what’s happening between them, they face their hardest test yet: keeping their hands off each other when they go undercover as strangers. Someone is selling deadly secrets to Great Britain’s enemies and a terrible chemical weapon is about to fall into the wrong hands.

Nick and Aidan are ordered to the scene of the crime—a government lab—to track down the traitor. Faced with the prospect of a long stay in a remote Northern corner of England, Nick offers Aidan a bet: whoever breaks their self-imposed celibacy first by instigating sex will pay the price when they return to London. It’s all fun and games until they actually have to tough it out. If they can’t make this work, all of Great Britain could be at risk, but neither of them can think clearly when they have to be apart.

Well that was just adorable!

“A wager, then. Can you, or can you not, go without sex for the duration of the case?”

Aidan Blake is a MI-5 Operative and pseudo-mad-scientist who has a tendency to set up chemistry experiments in his kitchen – though, he’s at least considerate enough to leave room for the kettle 😉

Nick Kaplan is ex-Military, pulled off field work by MI-5. The resulting pay-cut meant moving in with a flat-mate in order to save money.

We’re dropped right into the middle of this relationship, but apparently these two quickly went from flatmates to lovers. They’re solidly in the ‘lovers’ phase by the time you start the book. Aiden and Nick worked together at MI-5 before Nick was taken out of the field, and now a case has come up where both of them are going undercover.

National security is at risk..

The boys must go undercover at a government lab to determine who is selling state secrets to the highest bidder. Aiden will go undercover in the lab as a researcher, and Nick will put on his military uniform once more to infiltrate the lab’s security force.

Here’s the thing – Nick and Aidan have to pretend to be strangers or their cover will be blown. They’ve spent the last six months burning up the sheets together in their flat… Now they’re facing a month of celibacy while they work on the case.

The boys make a friendly wager:
Who will cave first and demand sex?
The resulting hijinks were wonderfully humorous and light-hearted.

This was a very quick story, and I’m afraid there wasn’t much depth to it.

We don’t get much back-story on our main characters, but this is a series, so with any luck details will be filled in as additional books are written.

I didn’t feel much suspense… At least, not as much as I was expecting considering the fact that this was an undercover mission with National Security at stake.

Overall it was very sweet and entertaining… Oh, and very British 🙂

Side by side in Aidan’s bed, still panting, Nick glanced over and grinned. “A month? Are you sure you can handle that?”
“Don’t be ridiculous. We’ve been apart longer than that.” Aidan was a delicious mess, dark, damp curls around his face and at the nape of his neck, cheeks still flushed with orgasm.
“That’s not what I mean. We’ll have to act like total strangers for a month. Maybe longer.” Nick rolled onto his side and ran his fingertips up a trail of sweat on Aidan’s chest. He leaned in until he was breathing hot breath into Aidan’s ear. “A whole month without being touched.” Aidan stretched beneath his hand and Nick stroked down the tensing and relaxing muscles of his belly. He dropped his voice to a dirty whisper just to watch Aidan squirm. “A whole month without me coming inside you.” Aidan gave a small gasp and arched his back. “You’ll see me every single day and won’t be able to lay a finger on me.” Nick’s own fingers had moved to barely tease the still-damp skin of Aidan’s soft cock, which twitched in response.  “I don’t think you can do it.”
Aidan took a breath, trying to compose himself. “Of course I can. Unlike some people, I’ve been perfectly capable—and quite happy—being celibate for years on end. A month is nothing, not when I have a case to focus on.”
“Mm, that was before me, though,” Nick said, curling his fingers to carefully lift the flaccid penis beneath his hand, and felt another twitch, suggesting it wouldn’t be flaccid for much longer. “That was before you got used to having sex nearly every day for six months.”
“Arrogant,” Aidan snorted. “You are not the—” he gasped when Nick wrapped his fingers more firmly around him “—the air that I breathe, Nick. I can survive without you as necessary.” Nonetheless, he arched towards Nick’s hand his cock growing harder by the minute.
“Really,” Nick said. “Then I guess I can stop this, then.” He took his hand away, but Aidan caught his wrist and brought it back to his crotch.
“No, don’t stop.” The words tumbled out like Aidan didn’t mean to say them.
Nick laughed and bit at Aidan’s ear, drawing out a quiet groan. “You’re just proving my point for me.” By now Aidan was fully hard, and Nick stroked him, fast and loose.
“What is—what is your point, then?”
“You won’t be able to live without me for a month.”
“Yes, I—mm, I will.”
Nick curled closer, draping his leg over Aidan’s, pressing his own cock into Aidan’s hip. “A wager, then. Can you, or can you not, go without sex for the duration of this case?”
“And if I can’t?” Aidan wasn’t quite distracted from what Nick’s hand was doing, but he turned his head to look at Nick.
“No experiments in the kitchen. For a year.”
“Hmph. And if I can,” Aidan said, reaching across to bite Nick’s lower lip. “You burn that hideous Christmas jumper.”
“That jumper was a gift from my mother.” Nick had him though—he was actually going to agree.
“Yes, and you hate it just as much as I do.”
Nick turned the bite into a lip-sucking kiss, slowly pushing himself up and over until he was straddling Aidan’s hips. “You’re on.”

Jade Cain writes what turns her on: hot men in uniform, confident women who know what they need, the heady feeling of lust when you realize you’re about to get everything you ever wanted. She writes (and reads) about lovers of all genders who laugh together–and sometimes at each other. Sex is fun, and often silly, and her works celebrate that humor alongside the heat.

When she isn’t writing erotica, she writes romance for a traditional publisher as Lisa Nicholas.