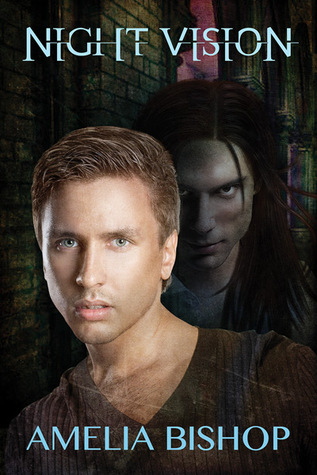 Theron Antonopolis, a strige, feeds on human emotion. In a tranquil suburban neighborhood, his best meals come from a quiet systems administrator who’s become more than a source of nourishment for Theron—Alex Rowler is an obsession. Theron can no longer remain in the shadows. When they meet, any attraction Alex feels toward the sexy monster is overshadowed by his anxiety and distrust of Theron’s supernatural powers. But sensing the underlying arousal, Theron begins courting his human.

As months pass, Theron falls deeply in love, and the need to complete the strige bonding ceremony with his human lover becomes overwhelming. But a permanent commitment is too much, too soon for Alex, and he delays the joining, despite Theron’s insistence they are running out of time. As an unbonded pair, however, Theron and Alex draw the attention of the Midnight Parliament, and the lovers are brought to trial to determine their fate

Buy this Book
Amazon | Dreamspinner | ARe

What a delightful surprise!

“I am a strige. We are… birdlike, I suppose. Creatures of the night.” He hoped that came off dramatic and cool, not silly. It was difficult to refer to yourself as a creature of the night and still sound serious.

A wonderfully fresh take on PNR.

This book was original, entertaining, sweet and oh so sexy!
There was a good dose of humor which kept the story fun and light hearted, but there was also a nice balance of suspense as the story progressed….

The real strength of this story was in the romance – The blooming relationship between the MCs was so much fun to read. I certainly wound up with a case of the warm fuzzies as I read this story.

Oh, and the sexytimes were just plain HOT.
Just the right amount of steam… Perfect!

The only thing that kept him from running was the cold certainty that he couldn’t escape Theron on foot. He was caught. Even as his rational mind struggled to create logical excuses for the strange qualities Theron had demonstrated, some part of him knew: Theron is a monster.

Alex has been languishing in a relationship with a man who seems content to ignore his feelings. David tries to solve the emotional disconnect between them with sex, but Alex craves something more… He wants a commitment and the promise of a future together. After years of living with this unsatisfying relationship, Alex is ready to sever ties.

Starting over is scary for anyone, but Alex’s new relationship status is made even more nerve-wracking by Alex’s neighbor – while the attention is flattering, Theron is coming on awfully strong… and there’s something very different about the handsome man from down the street…

This was turning into much more work than he’d anticipated. But it was time, and Alex was the first human he’d felt anything for. He could do this. If he could eliminate Alex’s fear, he would win him.

A strige feeds off of human emotion to supplement their diet – the strongest emotions of anger and lust are particularly fulfilling. Theron uses the quiet neighborhood Alex lives in as his own personal restaurant. He lurks in the shadows and trees silently absorbing human emotions without the donors ever being aware of his presence.

Emotions in Alex’s home have been particularly high over the last few years as he and his partner have fought and made up nearly every day.

While the outpouring of emotion has been satisfying Theron’s hunger for years, the strige has developed a bit of a crush/obsession with Alex. When the couple finally splits, Theron immediately steps in to claim Alex as his own… and that’s where the story gets so interesting.

Theron might feed off of human emotion, but he’s completely clueless about human behavior. He’s a monster… but he’s a fucking ADORABLE monster…

He’s not scary possessive like the alpha-males prevalent in PNR. Theron is charmingly awkward in his courting of Alex. He has this fish out of water quality about him as he attempts to replicate his idea of courtship. It’s so genuine and sweet – made all the more endearing by the fact that Theron has truly fallen in love with Alex and wants to spend the rest of his life with him.

So we have a man who craves a partner who is sensitive to his feelings…
And a man who feeds off emotions and can detect the slightest emotional change.
Seems like a match made in PNR heaven, right?

Right!
…er, for the most part.

See, Theron wants his relationship with Alex to progress naturally. Even if that means breaking a few strige rules… A bond between a human and a strige is literally ’till death do us part. Alex just managed to get out of a long term relationship, and he doesn’t want a repeat of that experience… Especially since a breakup would have deadly consequences…

Theron must ‘bond’ with Alex, and quickly. The longer they wait to complete the bonding, the more Alex’s life is in danger. Theron refuses to force Alex’s decision, but time is running out.

Okay, right out to the barrels and back inside. No reason to think he’ll be out there. But he was always out there. In the past few weeks, Alex had seen Theron almost every night, and since he’d avoided going outside, the glimpses had become more and more obvious. Theron clearly wanted to talk, and yet he was waiting for Alex to make a move, giving him control. Maybe it would be best just to talk to him? Better than hiding inside every night, anyway.

Alex hoisted the bag from the bin and tied it securely, slipped on his flip-flops, and walked outside. He kept his chin high and his steps brisk, and though his eyes scanned the yard, he held his head still, trying not to appear nervous. He deposited the garbage and was halfway back to his front door before Theron blocked him.

“You’ve been avoiding me.”

“Shit!” He jumped, despite having half expected the meeting. “I…. Sort of. You’re kind of scary.”

Theron came closer, too close, pressing his body up to Alex’s, pushing him against the side of the garage. Alex let himself be pushed there, not sure he could stop Theron if he tried, and not sure he wanted to. Theron’s hands were gentle, his body hard and strong. Despite the circumstances, Alex’s heartbeat increased more from arousal than fear.

“Ahh, Alex, finally you’ve stopped fearing me. This is much better, isn’t it?”

Theron’s whole body pressed against him now, chest to thighs, and Theron massaged Alex’s hips and ass while he spoke into his ear. The sudden intimacy overwhelmed Alex, and he was unable to think rationally. Theron shifted his hips, arching against Alex, his arousal obvious.

Theron laughed at Alex’s discomfort, a soft deep chuckle into the crook of his shoulder. “Not afraid at all, it seems. I like this side of you, pontiki mu.” He planted a small kiss below Alex’s ear, making him shiver.

Amelia Bishop lives in New England, just a block from Narragansett Bay, where she walks almost every day of the year collecting shells, sea glass, and random pieces of garbage she considers “treasure.” Amelia believes there is magic to be found in almost anything if you look closely, and delights in revealing the extraordinary hiding within the ordinary. Her stories celebrate the most magical and extraordinary thing of all: love.

When she isn’t writing, or walking along the bay, Amelia enjoys camping, hiking, painting, crocheting, cooking, and spending lazy days reading on the beach.