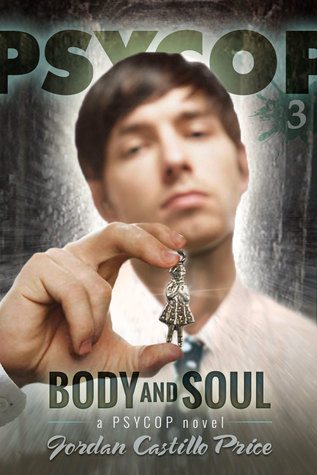 Meanwhile, Jacob tries to find a home they can move into that’s not infested–with either cockroaches, or ghosts. As if the house-hunting isn’t stressful enough, Vic’s new partner Bob Zigler doesn’t seem to think he can do anything right. A deceased junkie with a bone to pick leads Vic and Zig on a wild chase that ends in a basement full of horrors.

This series is getting better and better with each book.

“I’m trying really hard to be a decent boyfriend,” I said. “But I think I might not be cut out for it.”

Six weeks after the whole kidnapping/GhosTV/amped up paranormal activity incident, Vic is still on leave from the department. You’d think Vic would use the time for rest and recuperation after his ordeal, but no…

Vic has faced off against murderers, ghosts, and all manner of terrifying things, but he’s about to face his biggest challenge yet: Meeting his boyfriend’s family!

The boys are spending Thanksgiving with Jacob’s family in Wisconsin, and Vic is seriously rethinking his new found sobriety. Falling off the wagon seems mighty alluring when faced with inquisitive kids, Catholics, and the disembodied arm of Jacob’s uncle bleeding all over the dry turkey and cranberry sauce.

No evidence,
No pattern,
No suspects,
No Leads,

And poor Vic is teamed up with yet another new partner…

I was thankful that Zigler was willing to interview everyone. In fact, I would’ve been more comfortable if he could just call all the shots and drag me along like a really expensive and high-maintenance piece of forensics equipment. When everything was said and done, wasn’t that all I really was?

Vic was in his element in this book – talking to ghosts to solve his case, and pulling leads from his spirit witnesses. There’s no evidence that the missing persons are actually dead, so Vic and his new partner are canvasing their houses and last known whereabouts looking for lingering ghosts.

Vic doesn’t come into contact with any undead versions of the missing people, but there’s no shortage of helpful chatty ghosts around to point him in the right direction.

Vic is understandably weary of his new partner. He hasn’t had the best luck with partners since Maurice retired. The new clean-cut detective seems like a by-the-book kinda guy, but at least he doesn’t seem like the type to kidnap Vic and experiment on him…

I wouldn’t have thought I’d like it, since I’m so twitchy about being restrained. But when Jacob wraps his body around mine, I feel more like he’s shielding me than engulfing me.

I think I fall for Jacob a little bit more with every book. He is the perfect companion to balance Vic. He’s so warm and tender, and just lovely to read.

While Vic works long hours on his case, Jacob is house hunting. Finding a new place that meets his specifications and isn’t being haunted is a tall order.

As I said before, this series is progressing wonderfully. Each book has been well written and engaging. There are new obstacles – personally and professionally – for our characters which keeps everything feeling fresh and interesting.

I end each book satisfied, yet excited to continue the journey!

“Uncle Jacob? Did you get to shoot anybody since last summer?”

Jacob’s nephew, Clayton, asked this with the eagerness and joy of a kid who’d just learned that school was cancelled. Clayton was in fifth grade. I have no idea how old that would make him.

“You shot someone last summer?” I muttered, smoothing my napkin on my lap to the point where I probably looked like I was playing with myself. Not exactly the impression I’d wanted to make on Jacob’s family on our first Thanksgiving together.

The muttering? Not usually my style, but I was feeling uncharacteristically mouthy. It seemed like the moment I had a thought, it made its way through my vocal cords and out my mouth before I had a chance to pat it down and make sure it wasn’t going to jab anyone. I’d been this way since I’d stopped taking Auracel and Seconal over a month ago. Here I thought I’d been mellowing all these years, when really, it had just been the drugs.

“No,” Jacob answered patiently. “I try to avoid shooting people.” And then he looked at me. “Carolyn and I walked in on an armed robbery in progress at the convenience store on California and Irving. It was a clean shot to the leg.”

Departmental policy allows us cops to decide whether to go for a lethal or a non-lethal shot when a criminal’s got an unarmed civilian at gunpoint. If Jacob had shot someone’s leg, I had no doubt it was exactly where he’d been aiming. Jacob is a Stiff, the non-psychic half of a PsyCop team, and not only are Stiffs impossible to influence by sixth-sensory means and impervious to possession, but they’re usually crack shots. The Stiffs who I know, anyway.

I’m the other half of a PsyCop team, the Psych half. Not Jacob’s team; Carolyn Brinkman was Jacob’s better half, on the job at least. I didn’t currently have a Stiff of my very own. Maurice, my first partner, retired—although I still lean on him way too much. Lisa, my second partner, was kicked off the force when they discovered that she was as psychic as Jean Dixon. She’s off being trained for the psy end of the whole PsyCop business now, out in California. Technically she’s just a phone call away, and yet sometimes it feels like she’s on an entirely different planet. Even when she gets back, I won’t get to partner with her, since they only pair up Psychs with Stiffs.

And then there was my third partner, Roger. The bastard kidnapped me for some under-the-table drug testing, and I’d been so gullible I’d practically given him a key to my apartment. Roger was rotting in a jail cell, last I’d heard. The whole affair was pretty hush-hush. Maybe I could’ve gleaned a few more details, if I was the type to obsess about the little things, like where one’s arch-enemy is incarcerated, and whether or not he’s shown up for roll call recently. But, frankly, I’ve never found details very comforting. I think about them, and I just get overwhelmed. Roger went bye-bye, and I came out of our encounter intact. That’s all I really need to know.

Six weeks later and I was still on medical leave. I felt fine, probably due to the amount of actual blood cells coursing through my system in lieu of the drug cocktail I was accustomed to.

“Did you ever shoot anyone?” Clayton asked me, eyes sparkling.

Clayton had Jacob’s phenomenal dark eyes. Or Jacob’s younger sister Barbara’s eyes. Which were Jacob’s father’s eyes, as well as the eyes of the wizened old lady at the head of the table who was about a hundred and five. She’d been giving me a look that could probably kill an elephant ever since we’d gotten there and Jacob had introduced me as his boyfriend.

I think he’d primed his family over the phone. But still. He had to go and say it out loud and rub it in. Because that’s the way Jacob is. Not that he’d be bringing a man home for Thanksgiving for any other reason. But that’s beside the point.

“Clayton Joseph,” snapped Barbara. She might have had Jacob’s eyes, but she certainly couldn’t hold a candle to his cool composure. “That is not an appropriate question for the dinner table.”

Grandma Marks glowered at me from the head of the table, her dark eyes, half-hidden in folds of wrinkled skin, threatening to pierce me right through. I’d figured she hated me because I was doing the nasty with her grandson. Maybe she had a thing against psychics. Hell, maybe both. I’m usually just lucky that way.

Author and artist Jordan Castillo Price is the owner of JCP Books LLC. Her paranormal thrillers are colored by her time in the midwest, from inner city Chicago, to small town Wisconsin, to liberal Madison.

Jordan is best known as the author of the PsyCop series, an unfolding tale of paranormal mystery and suspense starring Victor Bayne, a gay medium who’s plagued by ghostly visitations. Also check out her new series, Mnevermind, where memories are made…one client at a time.

With her education in fine arts and practical experience as a graphic designer, Jordan set out to create high quality ebooks with lavish cover art, quality editing and gripping content. The result is JCP Books, offering stories you’ll want to read again and again.