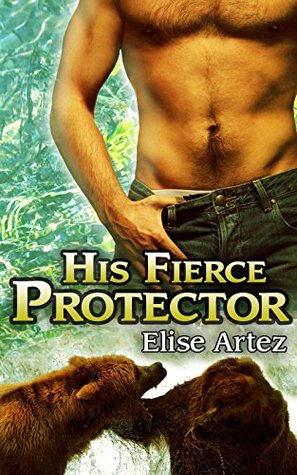 His Fierce Protector by Elise Artez
–
Series: Stand-Alone
Source: Review by Request
Copy Provided by the Author
My rating: 4 of 5 stars

I knew he wouldn’t be gentle. I didn’t want him to be gentle.

When Ryan planned his survival trip to the Colorado Rockies, he never expected to encounter a tall, dark, and handsome beast of a man. But when rugged park ranger Bryce orders him to leave, his hopes for something rough and wild are dashed. Little does Ryan know his mysterious protector has a big, hairy secret, and a carnal urge to claim a mate.

Now Ryan may have more man than he can handle when this hot alpha shifter takes him hard and without protection.

“A bear can catch a scent from miles away, and he won’t stop until he gets what he wants.”

Ryan swallowed hard, though not from the prospect of a giant grizzly devouring him in his sleep. There was something in the way the ranger said it that made it seem like he wasn’t really talking about bears at all…

Elise Artez has an impressive talent for writing balls-to-the-wall paranormal erotica. This book wasn’t mushy and cute, it was hot as hell and lightening fast.

Ryan is camping in the Colorado Rockies all alone. He’s filming a documentary to prove that anyone can survive out in the wilderness.

Unfortunately, the local Ranger wants him off the mountain immediately. Bryce is fairly certain that Ryan’s amateur camping skills are going to get him killed – there’s far more to survival than making a fire… and there are dangerous creatures in the mountains…

This is no ordinary wilderness hookup, though…
There are consequences when a bear-shifter claims a mate…

Side Note:
Points to Elise Artez for avoiding references to

Overall, I enjoyed the story. My only disappointment was that we’re not getting a series out of this – I would love to see another short with these two characters… Or at least a badass epilogue.

Ryan closed his eyes, trying to think warm thoughts. Sitting at the hearth while a roaring fire blazed in his family home. Wrapped up in the blankets after a nice, refreshing night’s sleep. Bryce’s large arms tight around him, holding him to a broad chest that heaved with every shuddering breath as Bryce’s thick cock pushed into him.

It wasn’t any wonder to Ryan which thought won out and actually sent a surge of warmth through him, though most of it beelined toward his cock, his blood pumping hot.

Maybe he could generate more of his own heat…

Shifting in the sleeping bag so that he was on his back, he slid a hand down his clothed stomach, rubbing it over the fabric a few times to warm it up. He didn’t unzip his pants just yet, instead rubbing over his bulging erection, a throaty moan coming from him as he tilted his head back.

He imagined Bryce’s hand doing this, big and strong, following the hard line of his length defined through his pants, gripping between his legs to cup his balls. Jeans weren’t very good for over-the-pants play, though, and Ryan eventually had to give in, hoping the cold wouldn’t kill what he had going.

He deftly undid the buttons and slid the zipper down, his cock tenting his boxers. He pulled it free, gripping around the shaft and stroking slowly. His hips moved in time with his fantasy as he imagined Bryce pumping into him, his legs draped over those broad shoulders.

“Fuck,” he growled, his hand starting to pump furiously up and down his shaft. The warmth problem was definitely solved, but now he craved release.

No, that wasn’t true. He craved Bryce, like some intoxicating drug. He’d gotten one taste of the man’s presence, and now he couldn’t think of anything else.

He was so close, his hips lifting up off the ground as he stroked as fast as he could. So, so close. In his waking dream, Bryce was close, too. Fucking him with such a savagery that his whole body shook.

Tension coiled in him, and then he heard it. A sound through his haze. Not just the simple snapping of a twig, but brush being trampled as something very large barreled through. Straight toward him. His hand was off of his cock instantly, and his eyes were wide as he tried to catch his breath. He fumbled for a skinning knife, knowing it wouldn’t do anything to protect him from whatever had invaded his camp.

“Get away!” He shouted. He’d heard startling an animal was the best way to get it to leave.

But as he peered out of the lean-to, he didn’t see the huge, hulking beast he’d heard. Just the silhouette of a huge, hulking human. “…Bryce?” He asked, both hoping for and dreading the confirmation.

But there wasn’t any.

Instead, the man was upon him, his broad frame pinning Ryan easily. Powerful thighs squeezed against his hips, and Ryan looked up in shock. It was definitely Bryce. He could recognize those honey eyes as they bored straight into his soul. They were practically molten, and as Bryce leaned down, Ryan could feel the ranger’s erection straining hard against his pants.

He must have fallen asleep. He was still dreaming. He had to be. This wasn’t happening.

“Wh-what are—” A large hand clapped over his mouth, and Ryan fell silent.

Bryce rolled his hips, grinding against him, and Ryan moaned desperately. If he did that again… Fuck.

But Bryce didn’t seem to be here to give him what he wanted. His hips lifted but his head tilted down to Ryan’s neck. Rough stubble scratched against his smooth skin as Bryce inhaled his scent. It took Ryan a moment to realize his hands were still free, and he made use of them while he could, one hand gripping one into Bryce’s short hair while the other curled against the sleeping bag.

Bryce’s hand withdrew, and no sooner could Ryan get out a gasp than Bryce’s lips crashed down on his. He practically melted underneath the larger man—his lips were as soft as he’d imagined, but he used them with such force that there was nothing tender about it. Ryan moaned into the kiss as Bryce’s tongue probed his mouth, and his free hand moved to Bryce’s ass, trying to urge him to grind against him once more.

But as soon as he felt Ryan touch him, Bryce stiffened. He pulled back so fast that Ryan’s head spun. “W-wait,” he croaked out, his throat suddenly dry. But Bryce was already backing out of the lean-to, taking some of it with him in his hurry. He was gone before Ryan could even sit up.

Elise is fond of misunderstood monsters: Fantastical creatures that are aggressive, frightening, and inexplicably alluring. She’s always been disappointed that the Disney adaptation of Beauty and the Beast saw the beast turn back into a man, but rest assured, that never happens in her stories. The beauties always get their beasts in their truest forms. Minotaur, satyr, and shifters of all kinds, there is no beast that cannot be tamed.