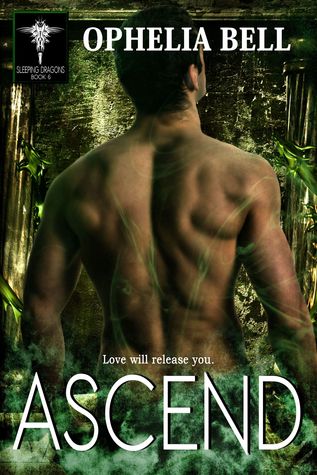 Corey has always led an honorable life. He’s worked hard, found success doing a job he enjoys. He longs for a partner—a woman who will be his match, who might love him as much as she challenges him.

The last thing he ever expected was to wind up the consort of the Dragon Queen.

Racha, the Queen of Dragons, is awake after five centuries, but her promised mate is reluctant to bed her, the last and most crucial step in the ritual to awaken the brood of dragons she rules.

Will she be able to convince him before the magic consumes her?

A lovely end to a fabulous series!

Am I willing to be hers. Marked. Branded. Bonded?

OK… So it wasn’t really the END… This book might have marked the conclusion of the sinfully hot Sleeping Dragons series, but we learn that this is only the beginning for the characters we’ve come to know and love…

Ah, but I get ahead of myself – the explorers have been completing the sexual rituals necessary to awaken the dragons within the temple. One man has been the constant observer up until this point, and his time has finally come.

Corey cannot escape the potent sexual energy which saturates the temple, but he has chosen not to act on it. He is both fascinated and appalled by the mindless debauchery he has witnessed. Corey requires a connection to his sexual partners beyond lust.

Unfortunately, the success of this sexual marathon of dragon waking rests on his shoulders. It is his destiny to bond with the queen and complete the ritual.

Racha, Queen of the Dragons, has been trained for this moment. She has absorbed the sexual energy of the court dragons, and must push that energy out into the temple to wake the rest of her brood.

She holds the fate of an entire generation of dragons in her hands. Failure to complete the ritual will lock all dragons back into their sleeping form.

Sacrifices must be made for he greater good…

A new day is dawning, and a new generation of dragons will take to the sky…

Ophelia Bell’s Rising Dragons series will continue the narrative of our favorite characters as they adjust to a new life together.

Racha stared down at the space between them where their hands had been joined. How was she supposed to make him understand? If what Corey said was true, the modern world she had awoken to was far different from the one she’d fallen asleep in, but that was the least of her concerns.

“I do need you, but not for the reasons you think.” Racha reached for Corey, but his hand shot up quickly and gripped her wrist before it reached his cheek.

“No. I’ve seen your power. I think the only thing you need from me is a good hard fuck and after that we’ll be done. Tell me, do you really want me? Or am I just some surrogate prick you can use to escape this prison?”

The strength of his grip startled her at first, but the ferocity of his gaze angered her. “Let go of me! You don’t understand!”

“You’re a dragon. You have power. Make me understand.” His brows drew together shadowing his already dark eyes. Eyes she’d begun to get lost in while they spoke, but which now frightened her.

Frustration beat at her will as she struggled against his strong grasp. How had this man not given in to the magic already like the rest of them? “I can’t force you! My magic doesn’t work that way.”

“I don’t care how you do it. If you want me to know how badly you need me, make me understand why.” His eyebrows raised in emphasis and he let go of her wrists, leaving them tingling from his touch. She wished she could go back just a few moments to better enjoy the first gentle grasp of his fingers around hers. He was a good man, but not a one to suffer secrets easily.

Racha’s chest constricted with a tight, painful feeling she’d never experienced before. She stood up abruptly and walked away a pace, struggling to contain the emotions welling up. Wet droplets trailed down her cheeks and she raised a hand to wipe at one.

She stared at the crystalline orb on her fingertip, not comprehending what it meant but knowing she’d been beaten. There was no recourse. No other alternatives. If he didn’t agree to their coupling there was only one thing left to do. The power was already swelling to a breaking point within her. It must be close to dawn.

She sighed shakily and nodded, still refusing to face him. “There is an alternative. The power is persistent. We are each other’s slaves right now, the power and I. You would have been the key to our release. If you won’t give yourself to me, the power will take its course anyway.”

“Leave. You’re safer out of this room.”

She turned on him, her chest tight with rage as much as sorrow. “You want to help? What I want more than anything is for you to fuck me. But it isn’t just to release the others. I… I want you.”

She wanted him like she couldn’t believe—for his strength of will as much as his strong body. A man who had withstood the magic of the temple throughout the entire ritual and held out only to give her a chance at convincing him to give in would have been a perfect mate.

She cursed herself for the lack of effect her words had on him. She’d been so strong as a young dragon. She excelled at her training, was described as persuasive and effective by her teachers and the Council both. Yet this man somehow made cracks appear in her foundation that she’d never known existed.

He didn’t answer her, just looked away again, his jaw clenching. If he wouldn’t have her, and wouldn’t leave either, there was only one other option.

“I want you to bind me before it’s too late. The power will force me to change and I may not be rational when it takes over. If you insist on staying, you must bind me or I can’t promise you’ll survive until dawn.”

She held her tongue on the last plea she could have given him that may have changed his mind, but to tell him now would only make her seem weak and helpless. She would not end this night by begging.