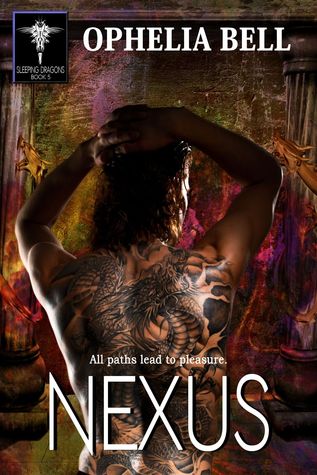 Born to a race of creatures that strictly polices its presence among humans, Kris possesses a gift only one dragon in each generation may possess – that of a human form that requires no magic to maintain. Only to Kris, his form is a curse because it means he has spent his life without the touch of another since he left his mother’s breast.

Graced by his mother with the mark of his race and raised by a reclusive sect of monks, Kris learns his destiny, and the means to shed his affliction, lies within the slumbering depths of a long forgotten temple in the Sumatran jungle. To fulfill his destiny, he must lead a group of archaeologists there to awaken his brethren.

Kris has been a patient observer during the ritual, watching while the dragons of the temple’s court gathered sexual energy from the humans. But finally his part of the ritual is at hand. His task is to receive that gathered power through the same means it was taken, and serve as the conduit through which that energy will awaken their Queen.

Isolation can affect a man in many ways. He can either feel apart from his world, merely looking in form the outside, or by contrast he may feel at the very center of it with events revolving around him and beginning to coalesce. Kris had been at the edge looking in for his entire life, but the balance in focus was about to shift.

At this point in the elaborate sexual ritual used to awaken the dragons, each of the explorers who entered the temple have mated with their respective dragons with only two exceptions – Corey (who will be shacking up with the Queen in Book 6) and Kris – who has patiently guided each team member through their role in the ceremony.

He has had the dubious pleasure of watching every single mating unfold, but has been unable to participate.

Through this story, we learn that Kris has become a bit of an expert in self-denial.

Issa ached at the idea of the beautiful man never having felt the touch of a lover. His eyes seemed so expectant now, and so determined at the same time. She had the sense that he would do this even if it hurt him, and it might, but she would be here until it played out one way or another…

Kris has never known the touch of another – not even a casual handshake – absolutely no skin contact. To make matters worse, he can’t even bring himself pleasure – his whole life has led to his role as The Catalyst…

Kris is the only dragon in this generation to walk the earth while the rest of his species hibernates inside the hidden temple.

His mission is to find the humans fated to wake the dragons, and to take them into the hidden temple. Once the group is inside he must facilitate each step in the ritual and ensure that everyone participates fully.

In his entire life, he has never had an orgasm…
Fate is about to make that up to him…

As each dragon brought their mate to Nirvana, they’ve been collecting and storing the energy from each orgasm. In this part of the ritual, the dragons will transfer that energy to Kris.

He is the conduit through which all the energy will feed the Queen.

He gave himself up to the pleasure, finding a rhythm between the others for the first time since it all began. The dragons gave all they had to him, and Erika’s team eagerly participated, slipping into the openings where they could be found. Some would pull back for a breather while others came forward…

Yet another fantastic installment of the Sleeping Dragons series – I cant wait to find out what happens with Corey and the Queen in the next book!

The sound of soft splashing reached his ears and he opened his eyes to see a single figure, partially obscured by a mossy outcropping several yards away. He raised up on his elbows and watched while the dark-haired Hallie dove beneath the water and came up again, water sluicing over her very naked breasts. Heat flushed his cheeks and he swiftly averted his eyes, but the image of the sleek globes, wet and tipped with hard, pink peaks had already burned itself into his brain. He gave in and looked again, too tempted not to.

Kris tried to decide if he should announce himself, but before he could, Hallie swiped her hands over her face and opened her eyes.

“Oh, shit! Sorry, Kris. I … ah … didn’t …” She stammered and then broke out into an embarrassed laugh.

“I can go,” he said, but made no move to get up. Hallie swam a little closer, taking him in. He glanced down his torso, relieved to see his cock was mostly behaving, in spite of how enticing her glistening breasts appeared in the morning light.

His eyes shot back up. She stood a few feet away, her lips quirked in a sideways smile. “I meant your tattoo,” she said, filling in his stunned silence.

Of course she meant his tattoo, but a different part of him responded to the mistaken compliment.

“Though the rest of you is impressive, too,” she said. Her gaze swept over him again, lingering at his groin.

“Thank you,” he said, choosing to ignore the throb of his hard-on in favor of studying her reactions. This was the first time he’d been naked and aroused in a woman’s presence. It wasn’t like he could do anything about it, but what would she do? Would she keep her distance the way every other human he encountered seemed to?

“You should come back in for a bit,” she said, her voice a low purr that reminded Kris of how his teachers occasionally spoke to each other when they thought he wasn’t listening. Once he’d discovered their relationship, that tone had always been a signal for Kris to leave the two men alone.

Oh what he wouldn’t give to be able to accept her invitation and see it through to her desired conclusion.

Pushing aside the internal regret, he replied innocently, “But I just dried off. Maybe you should get out and join me here. The sun feels nice.”

Hallie seemed to ponder his suggestion and started toward the rock he reclined on. A few feet away from him, her determination faltered and a cloudy look passed across her face.

She raised both hands and buried her face in them. “What the fuck am I doing?” she asked in a muffled voice behind her palms. “I’m sorry, Kris. I can’t.”

“Which would be…?” He continued playing dumb, even though he knew precisely what she’d been considering because that was what had gone through his own mind, too, in vivid detail. He quickly quashed the thoughts before they caused more trouble than they already had.

With that, the palpable tension wilted and Hallie sighed. She swam the last few feet to the rock and hoisted herself up beside him, close enough that the cooler temperature of the water radiating off her skin was tangible to his heightened senses. She stayed just far enough to avoid touching him outright.

“Something completely inappropriate and unprofessional. That’s what I was about to do. Jump your boner … er… bones. Sheesh, I’m a mess.” She glanced sidelong at his lap. “You don’t look much better, come to that.”

“If I ignore it, it’ll go away,” he said, sitting up and giving his stiff prick an irritated look.

“True enough,” she said. “If only all of life’s little annoyances worked that way.” After a contemplative pause, she changed the subject. “So, Mr. Jungle Guide, how soon until we reach this fancy dragon burial ground or whatever it is?”

“It’s a temple, not a grave. The dragons there are very much alive.”

“Ah. These dragons Erika’s so hot for. Don’t tell me you buy into her crazy ideas.”

“Not exactly.” Kris had taken the measure of the group’s leader and realized that in spite of Erika’s adherence to science, she was very much an acolyte of dragon lore. Her ideas about what to expect were only half correct, however. She definitely wasn’t expecting the ritual he was diligently leading them to. He hoped he’d be able to convince her of its value once inside the temple.

“Not exactly… You don’t believe her? Or… Please do explain, because us sane people are a little outnumbered at the moment.”

“Do you believe in destiny, Hallie?”

Hallie didn’t answer for several beats and Kris looked over at her. Her expression had grown even darker and she rested one hand lightly over her abdomen. In a shaky voice she said, “If you had asked me that a year ago I’d have said no, but now? Yeah, I think I do a little bit.”

“Good, because tomorrow we’re all going to meet our destinies. All seven of us.”