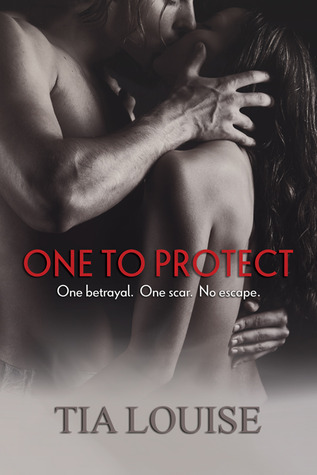 One to Protect by Tia Louise
–
Series: One to Hold #3
Source: Review by Request
Copy Provided by the Author
My rating: 4.5 of 5 stars

When Sloan Reynolds beats criminal charges, Melissa Jones stops believing her wealthy, connected ex-husband will ever pay for what he did to her. Derek Alexander can’t accept that–a tiny silver scar won’t let him forget, and as a leader in the security business, he is determined to get the man who hurt his fiancée.

Then the body of a former call girl turns up dead. She’s the breakthrough Derek’s been waiting for, the link to Sloan’s sordid past he needs. But as usual, legal paths to justice have been covered up or erased.

Derek’s ready to do whatever it takes to protect his family when his partner Patrick Knight devises a plan that changes everything. It’s a plan that involves coloring outside the lines and taking a walk on the dark side. It goes against everything on which Alexander-Knight, LLC, is based. And it’s a plan Derek’s more than ready to follow.

Holy Hell!
This was awesome!

This man is like water in the desert to me, and it isn’t hard to see the feeling is mutual.

Let me start off by saying that this book should be read after One to Hold which is the first book in the series and sets up the story of Derek, Melissa, and their conflict with Sloan Reynolds.

Here’s the good news: As of the date of this post, One to Hold is FREE on Amazon, so you can catch up on these awesome characters without spending a penny!

This book also layers in the characters of One to Keep, which you could technically skip because it’s a stand-alone, but boo on that! Having all the nuances of everyone’s individual stories will make this a much more enjoyable read for you… And besides, Patrick Knight is a dreamboat 🙂

Here’s the set up:
Derek Alexander & Melissa Jones are madly in love.
Melissa’s Ex-Husband, Sloan Reynolds is a violent, philandering, douchebag protected by his enormous bank account and political influence. He has attacked Melissa more than once, and Derek has seen enough scumbags like Sloan Reynolds to know that he’ll try it again.

Derek and his partner Patrick have a successful security business, which makes it even harder for him to accept the fact that Sloan Reynolds is a free man.

Derek has been running his business in Princeton, New Jersey while Melissa lives and works eight hours away in Wilmington, North Carolina.

He doesn’t see her as often as he wants,
He can’t protect what is so far away,
There’s a calculated psychopath after his fiancé.
His pregnant fiancé…

Melissa is content to leave the past in the past. She carries the scars – mental and physical – from her former life, but she sees them as proof of her strength.

She knows that Derek wants to protect her from Sloane. He sees Melissa’s ex-husband as a ticking time bomb. Melissa only wants to move on with her life.

Knowing that she can’t stop Derek from going after Sloane, Melissa enlists the help of Patrick Knight. Her instructions are clear: Keep Derek out of trouble.

Patrick injected a dose of much-appreciated humor to this story. He was serious when the time called for it, but he spent a lot of time making sure nobody went crazy. Patrick is such a fun, sweet character. I really enjoyed him in One to Keep, and I loved him even more after this book.

Patrick devises a risky plan – with the help of a former adversary – they will set Sloane up and gather enough proof to put him away for good.

Derek and Patrick just have to keep Sloan from killing the bait.
And Patrick has to keep Derek as hands-off as possible.

They’re risking their respectable business by bending the rules…
But if Derek gets his hands on the man who once beat his wife…
Well, you can imagine the kind of pain Derek would love to inflict on Sloane…
The kind that could land a man in prison.

The suspense and drama of staking Sloane and catching him in the act (without allowing him to actually victimize another woman) it was a fabulous platform for this book. These two men are experienced ex-military with a set of skills perfect for taking down a character that I’d personally like to kick in the balls.

It was a wild ride and a delicate balance.
Tia Louise really delivered with this book, and I’m excited to continue the series!

I don’t realize I’m asleep until the soft press of Derek’s lips against my forehead followed by the light scruff of his beard against my brow wakes me. My eyes flutter open, and he smiles down, fully dressed and leaning over the tub.

“Tired?” His voice is gentle.

Nodding, I lift one hand out of the now-warm water and touch his cheek. “Join me?”

I watch as he unbuttons his sleeve and rolls it up to his elbow. One hand on the wall behind my head, he leans forward and captures my lips as his other hand slides beneath the foam to cup my breast.

A breathy moan slips from my mouth into his, and keeping my eyes closed, I cover his hand with mine, following his movements from one breast to the other, his thumb slowly circling my hardening nipples.

He leans up and our eyes meet. “Good news.” My eyebrows rise with curiosity, and he continues. “Sloan’s back on the radar. He’s in Charleston. Bennett’s watching him and promises to keep me updated.”

“Now you don’t have to worry.” My voice is thick from napping followed by all the steamy kisses and touches. “I can stay home and work tomorrow.”

“I’d still like it if you had someone with you.” His voice is soft with a touch of sexy, fanning the heat he’s aroused in me.

“I’d like it if you were less clothed and in here while we discuss it.”

“I’m not sure we’ll do much discussing that way.”

Sitting forward in the tub, I carefully unfasten his buttons with the tips of my fingers until his olive chest is revealed. A scattering of dark hair covers the top of his lined torso, and I chew my bottom lip remembering how it feels against my breasts. With the pad of his thumb, he touches my mouth.

“Don’t bite your lip.” He leans in and brushes his against mine. “Let me do that.”

He gives me a little nibble, and I’m coming undone. “You’re taking too long.”

Tia Louise is a former journalist, world-traveler, and collector of beautiful men (who inspire all of her stories… wink)—turned wife, mommy, and novelist.

She lives in the center of the U.S.A. with her lovely family and one grumpy cat. There, she dreams up stories she hopes are engaging, hot, and sexy, and that cause readers rethink common public locations~

It’s possible she has a slight truffle addiction.