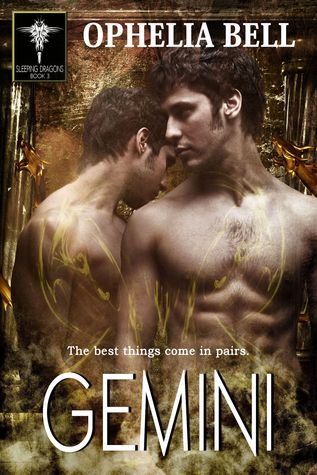 Dimitri and his twin brother, Alex, always led a charmed life. The inseparable twins were were good looking and smart. They grew up in an idyllic part of the world on the island of Crete. They studied hard together at university and graduated from a prestigious school with honors. But tragedy struck and Dimitri’s other half was wrenched from his life.

After that Dimitri struggled to fill the emptiness his brother’s death left behind. He had girlfriends. He had boyfriends. But nothing ever clicked, so he focused on being an award-winning anthropologist just hoping to distract himself enough from his loss to eventually move on. Then the offer of a lifetime fell at his feet, an expedition the likes of which he’d never imagined and just outrageous enough to spark his interest.

After a two-week trek through the Sumatran jungle, Dimitri’s wildest dreams are trumped by what he finds inside the dragon temple. Twin golden dragons await inside a dark chamber for him to awaken them. Will he be able to satisfy them both? All he knows when faced with the dilemma is that his sanity might just depend on it.

Sweet Baby Jesus! Is it hot in here?
..or is it just this series?

Twin forks of a tongue that large were apparently very versatile…

This episode of the Sleeping Dragons series presents the reader with a particularly delicious theme: MMF Erotica with fraternal twins! Throw in the Dragon Shifter element with their talented prehensile forked tongues, and you understand why I must warn you:

Do not attempt to read this book in public.
This story packs a heat that rivals dragon breath, people!

Ophelia Bell switched up her format with this book. We received a huge chunk of back-story on the main character, which was just lovely. Understanding how Dimitri once lived led to a greater appreciation for his journey within the temple.

If he could awaken two creatures like these beautiful dragons, find that apex of peace together, he might just be okay. Even if it were only one encounter, he believed he could leave here closer to whole than when he arrived.

Dimitri was once half of a pair of identical twins. I won’t spoil the story of he and his bother Alex, but know that they were incredibly close. The loss of his twin has left Dimitri lonely and unable to connect with anyone else.

He’s thrilled to be wandering around in this incredible archeological find, even if he wishes his brother could enjoy it with him. When he discovers that fate has led him to open the door of the Gemini, he suddenly has the opportunity to reclaim a missing connection… With a set of twins…

“He is so sweet, Brother. This one, if we share him, we must treasure him.”

The twin golden Dragons have been asleep in their jade forms for five hundred years. Brother and sister, sitting back-to-back in the darkness, their connection allows them to communicate telepathically.

No worries, squeamish readers, there’s no incest here. Just a whole lot of sharing between twins.

Dimitri let his hand skitter off the end of the golden statue’s erect cock. The warmth of it still tingled on his skin, a subtle signal to him that there was more to these statues than Corey believed. And these two… they were posed so perfectly. Back-to-back, identical aside from their obvious genders. The translucent gold of the jade they were made from shimmered in the flickering lights, enticing him to touch them both more. And he would, because he couldn’t resist. The few soft caresses he’d given them earlier had only incited deeper cravings. Cravings that didn’t help the aching in his balls while he stared at the two of them. To choose would be impossible. He had to find a way to awaken them both.

“You are two halves of a whole. That’s why I have to wake you up together. You see, I was like you. A twin. But I lost my other half last year. And I…” His breath caught in his throat and he paused to stare into the female’s stone eyes, imagining she could see him and was looking back with understanding. “I lost myself after my brother died. Ever since, I’ve been carrying around this dark emptiness that’s slowly eating me alive.” The only times he’d managed to come close to finding peace after Alex’s death and Thea’s withdrawal were the random, pointless hookups he’d made late at night with near strangers. They proved ultimately too fleeting and empty of meaning.

Standing beside these two figures, for the first time since that first night with Thea and Alex, his life felt pregnant with possibility. If he could awaken two creatures like these beautiful dragons, find that apex of peace together, he might just be okay. Even if it were only one encounter, he believed he could leave here closer to whole than when he arrived.

His hands kept steadily trailing over the surface of their jade skin. Up the male’s arms, down his lean, sculpted chest, then switching his attention to the female’s sweeping swell of breasts, the heft of which he could feel in his palm even though they were made of rigid mounds of stone tipped with hard little peaks. He experimentally bent his head to one, teasing the smart tip with his tongue. The texture of it was so close to real it caused a tingle to travel down his spine, and his balls tightened. He was sure he could hear a sigh from somewhere in the room, but when he looked at her placid face nothing had changed.

Both were nearly the same height as him, and slender but well-built. They were completely nude, with long, wavy tresses carved from the same jade, draping in perfect thick tendrils over their shoulders. The male also had the hint of a goatee decorating his angular face.

He circled them, touching by increments as he went, marveling at the warm, smooth texture of their skin. He paused in front of the male once and leaned in for a kiss. The lips felt smooth and he could almost imagine how pliant and inviting they’d be were the man alive. His tongue tingled when he grazed it lightly in the crease between, over the barely visible hint of teeth. He let his hand slide down the front of the figure’s torso and come to rest on the rigid cock that jutted from between the golden thighs. It felt warmer now. He must be imagining it… it must be warmth from his nearness permeating the stone. Still, it felt so close to life-like, rendered in minute detail from the sparse texture of carved thatch at the base to the tiny ridges of veins and the slight upward curve. The entire magnificent arc capped by the most delicious looking head, slightly tapered from the thicker shaft.

He stroked it in one long, languid motion, gripping his own cock in his fist at the same time. His living flesh jerked against his palm and a tiny moan escaped his lips.

“Fuck. I’d love to be sandwiched between the two of you. You’re just facing the wrong way right now. So what do you think I should do?”

He slipped back around to face the female and rested his lips against hers now, letting them linger a little longer while his hands traced the curve of her waist and his fingertips trailed up to her breasts. He made tight little circles around her nipples imagining she were alive and responsive.

All he could think was to touch them. Make love to them as best he could, considering they were mute, solid forms, frozen and beautiful.

He began by falling to his knees before her and pressing his mouth into the intricately carved folds between her jade thighs.