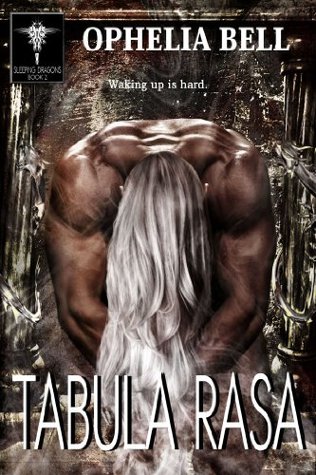 Camille’s smart, bookish, and very shy demeanor has left her in the dust where men are concerned. But she loves her job as a linguist specializing in lost, ancient languages. When she gets chosen for an expedition into the far reaches of the Sumatran jungle the likes of which no one has attempted before, she jumps at the opportunity. Along the way, she becomes enamored of the geologist, a beautiful man named Eben, but is too shy to approach him and he seems to keep his distance.

Something inside the dragon temple awakens a deeper part of her and soon she learns of the ritual to awaken a long-forgotten race of creatures the world hasn’t seen in thousands of years. Her research tells her she’s a key. A virgin sacrifice. But it doesn’t tell her what that means. The magic in the temple reveals only that the dragons must awaken for her to earn Eben’s attention.

She sheds her inhibitions in one dark, heated moment to make it happen. What follows is pleasure beyond her wildest and dirtiest dreams.

The Sleeping Dragons series turns up the heat with a virgin sacrifice!

“…I want to bury my cock inside you so deep I touch your soul.”

Don’t worry, they didn’t kill the virgin… She sacrificed her virginity in order to continue the ritualistic awakening of the Dragons. Book two picks up deep within the temple discovered by the team in Animus.

Imagine my surprise when I discovered that this book was even hotter than the first! I didn’t think such a thing was possible, but there you go. There’s no sophomore slump for this series, people. Just some unapologetic off-the-scales sexy-times filled with fun and adventure and motherfucking prehensile forked Dragon tongues!

She wasn’t sure if she should be so thrilled by the idea, but to be desired by something so magnificent couldn’t be a bad thing, could it? And that Roka wanted them both as a couple made her desire for Eben seem even more appropriate.

Camille is the sweet little virgin brought by the team to translate the ancient writing covering this mysterious temple. She’s been lusting after Eben since they left on this expedition and the potent sexual energy vibrating within the temple has turned her crush into something impossible to ignore.

In the last book Erika and Eben began the ritual of awakening the dragons…
A ritual which involves incredibly hot sex.

Camille was translating the scripture when she discovered the details of the ritual for herself – including the very important virgin sacrifice. As it turns out, she is a key player in the ritual this group must undertake.

She begins looking for Erika and Eben to tell them the news, and she finds them servicing (and being serviced by) their respective dragons within one of the chambers behind the throne room.

The only problem with this series is pacing myself. It would be so easy to sit down and read the entire Omnibus in one session… But the heat within the pages might cause my Kindle to melt, so I’m trying to keep it casual 😉

In Camille’s dreams, she was never the shy, bookish girl who got tongue-tied in the presence of a beautiful man. No, in her dreams she was the pursuer, dominant over her desires, the mistress of her own fantasies. The subject of those fantasies in recent weeks had been one man—lovely Eben—who had destroyed all her past fantasies in a single afternoon, just by being him.

While in the real world he barely spoke to her, in the dream realm he became her supplicant. There, he would kneel before her, begging for the honor of pleasuring her. Out of his mouth would spill the most deliciously dirty words. The power she held over him in the dark of night made her giddy with delight.

After hours working to translate the text etched around the jade throne in the ancient dragon temple, Camille had succumbed to exhaustion. She now dreamed she sat naked upon that very throne, flanked by the jade dragon statues. The setting was unlike past dreams, but the situation familiar enough for her fantasy to play out as it always did. Eben stood before her, naked. Her gaze traveled hungrily up his strong legs, over muscular thighs and narrow hips. His cock stood proudly erect and appeared massive to her inexperienced eyes, yet it didn’t frighten her.

Camille’s gaze lingered there, and she licked her lips, imagining the taste of the moisture that glistened like a tiny jewel clinging to his tip. Would he be salty or sweet? Still, there was so much more to him than his virile manhood. Her gaze moved higher, over his taut stomach, rippling with the evidence of a body well kept, over tight curves of pectorals and long, powerful arms dangling from wide, strong shoulders. So many moments had she caught herself staring at the way his muscles flexed when he would move—to lift his heavy trekking pack to his shoulders each morning. More recently, the image that came to mind was the bunching of his thick forearm when he stroked the column of the dragon statue’s huge phallus the day before, when they’d first explored the room at the heart of the dragon temple.

Eben’s face was what really incited her desire. The wide-set blue eyes that seemed to undress her on the rare occasions she managed to capture his attention, a perfect nose above his bow-shaped mouth—a mouth just made for doing those things he promised in her dreams.

Since the first day they’d met, two months earlier, her infatuation had grown with every stolen glance. While he rarely spoke to her, sometimes she would catch him looking, and each night her dreams would grow more intense until she woke in a sweat, her heart pounding and the flesh between her thighs craving contact.

But during her waking hours, she was far too reserved to follow through.

Words came more easily within the sanctuary of her subconscious. All she had to do was speak and he was kneeling at her feet.

“My sweet Eben. Tell me what you want to do to me.”

He leaned forward and tilted his head to rest one rough cheek against her inner thigh, tickling her sensitive skin lightly with his short stubble. His gaze rested at her core, the intensity of his desire burning in his eyes, causing her own flesh to tingle and grow warm without a single caress.

The corner of his lips brushed her skin when he started speaking. “I want to kiss those pretty lips, so deep there can be no doubt how much I want you.” His face tilted higher, gaze lingering on her plump, pink-tipped breasts. “I want to suck those perfect rosebuds until they’re so hard and tender you beg me to fuck you.”

With each word, he moved incrementally closer between her thighs, and now his lips barely brushed against her slick pussy. She had to fight the urge to tilt her hips closer to his mouth as the words gusted against her tender flesh. She held her breath, waiting, vibrating with desire in anticipation of what he would say next.

“And I want to bury my cock inside you so deep I touch your soul.”

True to his word, Eben nestled his face in the cleft between her thighs, fastening his lips against her slick folds. The wet heat of his mouth always startled her at first, hotter even than the flesh he latched onto. But shortly she lost herself in the sensations. He plunged his tongue deep inside her, sliding it in and back out in a languid thrust. The licks grew slower and longer with each pass, slipping up higher and swirling around and around her clit that already throbbed thickly with arousal.

Each curling tease of his tongue sent little jolts of pleasure through her body, bringing her nearly to the edge before he stopped. She braced herself for the next step and wasn’t disappointed. Rising higher on his knees, he latched on to one nipple, sucking until she gasped and arched her back. He worshiped the other in kind, swirling his tongue around her areola once before pulling the pink tip between his lips. When both nipples were thoroughly attended and aching from his attention, he took her face between his large hands, gazing deeply into her eyes.

“Take me in, baby. Let me fuck your tight, virgin pussy.”

She spread her legs wider, inviting his thick shaft into her. The sharp pain of tearing flesh came first, followed by the exquisite pressure of him filling her. Her virginity was ever present, undeniable even in these nocturnal interludes, so she used it as an anchor. It made the dream seem all the more real.