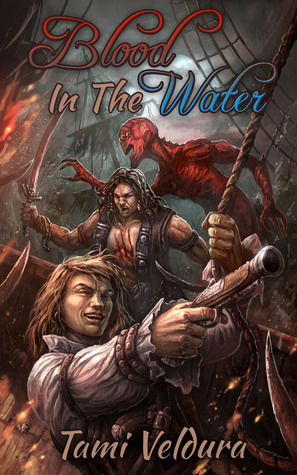 Blood In The Water by Tami Veldura
–
Series: An Act of Piracy #1
Source: Review by Request
Copy Provided by the Author
My rating: 4.5 of 5 stars

Kyros Vindex, treasure-hunter, has a problem. He’s carrying a torch for a fellow pirate with the sexual awareness of a teaspoon. Rumors say the man has killed hundreds. He’s determined to knock some sense into the work-a-holic that captains the Midnight Sun, but damned if he knows how.

Eric Deumont has more pressing concerns than the treasure-obsessed Kyros. There’s a creature inked into his chest that no witch in the seas will lay hands on for all the gold in the world. He knows it gives the Midnight Sun a cursed reputation and that doesn’t make living any easier. He has heard stories of spirits trapped for lifetimes inside spelled puzzle jars. Eric tracked down three of the pieces for such a jar with a lead number four. The fifth is still out there.

Even then, the spirit of vengeance that lives in Eric’s skin has no intention of giving up such easy access to the mortal realm. It craves blood and the light of the moon allows it to wreak unchecked havoc. Cursed is an insult. This is madness.

This. Was. Fucking. Awesome.

Methodical destruction. One by one. Patient. Ghalil made its way from man to man, running their heart’s blood across the deck in more creative ways than men with swords.

I loved every awesome moment of this book!

He had it bad for a man who could turn enemy and royally fuck up his day. What the hell was he doing here?

Kyros sails his pirate ship looking for a very specific treasure – sure, he hunts merchant ships and plunders their cargo, but he’s far more interested in laying claim to his rival Eric Deumont.

With a passion that borders on obsession, Kyros peruses Eric relentlessly. Kyros goes the extra mile to make Eric notice him, which is absolutely necessary, because Eric is monumentally distracted.

It was true, then. They could be caught. Captured. […] He could be free. He just needed all the pieces. Eric eased himself back half a step and said, “You need to tell me everything you know about that jar.”

The cursed captain of The Midnight Sun is a ticking time-bomb. He’s spent the last several years searching for a way to rid himself of the violent spirit which has chosen him as its unwilling host.

Eric travels the seas plundering exotic spices which keep the spirit Ghalil in check, and tirelessly searching for pieces of a puzzle jar which will trap the spirit and rid him of its torment.

Eric’s singular focus has blinded him to the attentions of Kyros Vindex until one fateful night.

Kyros corners Eric one evening and they spend hours exploring each other. The chemistry and passion is there for the taking… But so is the unfinished puzzle jar in Eric’s cabin. Kyros snatches the jar from its hiding place (not knowing its significance) in the hopes of having a bargaining ship to make Eric chase him for a change…

The suspense of their high-stakes treasure hunt was beautifully offset with wry humor sprinkled throughout the text:

“Pull up the green for parlay.”

Araceli grabbed his should her and hissed, “Are you mad? They’re after this ship’s goods.”

“And I’m chasing a treasure on that one.”

A single cannon fired in the distance. Kyros and Araceli ducked. The iron ball flew over the deck and tore right through the fores’l. Kyros scowled and spied through his glass again. From the fore of his ship, Eric Deumont extended one middle finger.

Kyros muttered, “What’s the flag signal for ‘That was childish and unnecessary’?”

This book was absolutely original and entertaining from beginning to end.

Blood in the Water was a solid story – it was humorous but not campy – There were no references to “plundering booty” or anything silly like that.

I don’t know what’s next for this series, but I’m going to be the first person in line to buy the second book.

He bought rabbit goulash at a tavern for lunch and caught himself watching the door for Vindex. Eric drained his beer and pushed it to the edge for the barmaid. This was getting out of hand—

“Of the Midnight Sun?”

A slim man worrying a flat cap in his hands sat across the table. He wore a merchant’s vest and puffed trousers, playing at landowner. “Sir, I’m here on behalf of Philippe Lamar— you have met?”

Eric sucked a piece of meat from his teeth and wondered what else could go wrong. Lamar was a tick on a nameless plantation island in the South. “I’ve heard of him.”

“It’s come to Philippe’s attention that you’re seeking pieces of a puzzle jar. He kindly requests you cease this project and turn your attentions elsewhere.”

Eric raised a thick eyebrow and took another spoonful of goulash. “Oh? Why?”

The messenger turned his flat cap along the edge. “It’s not known to me, Captain, but I must insist. Philippe was quite clear you’re not to continue.”

Eric sucked on a small leg bone and dropped it back into his bowl. “Philippe is an over-large beached whale, and his opinion means little to me. We did meet once, I stole something from him. Does he want it back?”

“No, I imagine not.” Eric rubbed his chest and lost the appetite for his meal. “There’s no message to bring back to Mister Lamar, I’m afraid.” He left several coins on the table and stood.

“But, Captain. Will you stop?”

“No.” Eric walked out of the tavern. The messenger didn’t follow him.

Disturbed, Eric returned to the Sun in a pensive, sour mood. He locked his cabin door and grabbed the keys to his chest off the table. Ghalil twisted when he crouched beside it; only the ring through Eric’s nipple kept the spirit from swimming around to his back or down one leg. An uncomfortable tug.

Eric swept his hand over the wood. An innocent looking box that used to hold a vengeful creature hidden in the depths of Philippe Lamar’s plantation hideaway. More than once, Eric cursed the day he had ever set foot there.

He jammed the key into the lock and popped the lid. Even Ghalil stilled under Eric’s shock.

His chest was empty. The jar: gone. The letter from Havana with it. Small wonder Vindex didn’t stay for dinner. With his hands full of Lamar’s bidding, it was too risky to form any attachments.

Eric felt his skin cool with the force of his anger. He pressed his lips into a thin line. He latched the chest and strode out to the crew deck. Two sailors and his quartermaster fell silent before the oppression of his still gaze. “Mister Muller, recall all hands to the mast immediately.”

“I’ve been robbed.” He turned to the stairs, hand spasming around the handle of his sword. “I’ve been betrayed.”

Tami Veldura is a writer, reader, lover and artist. She currently resides in San Marcos, CA. She writes science fiction, fantasy, steampunk, and GLBTQ fiction. you can email her at tamiveldura@gmail.com