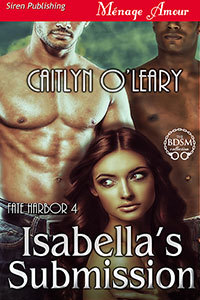 A dedicated teacher of homeless children, Isabella Camarena’s life is interrupted by a midnight call threatening her students. Isabella speeds across state to save a family of kidnapped migrant farm workers, but is soon in over her head helping a family lost to the world of human trafficking.

During an undercover assignment at Isabella’s school, former Special Forces Army Rangers Leif Johansen and Caleb Samuels met Isabella. After the assignment ends, they continue volunteering there, to pursue a relationship with Isabella, only to discover she’s missing.

After a harrowing rescue, Leif and Caleb bring Isabella home with them to recuperate. She reluctantly agrees so that she can stay close to the rescued children.

Amid the struggle to ensure the safety of the families, Leif and Caleb are determined to win Isabella’s heart. Despite her fierce independence, Isabella is naïve to the ways in which they want to love her. Can these former Rangers help Isabella embrace her submissive nature?

Can’t say I loved this one.

“…I can’t believe she’s as together as she is. She ought to be curled up somewhere licking her wounds, not holding down two jobs, and rescuing a bunch of kids from human trafficking scum.”

So much potential.
It started very slowly and awkwardly and it never really picked up…

The story revolves around Isabella, and I simply couldn’t connect with her character…

Isabella was no longer a woman they were just interested in. She was now theirs and she just needed to be let in on the situation.

Isabella is a teacher with a hero complex. She get’s caught in the middle of a human trafficking ring while trying to save some of her students.

When she goes missing for a few days, the two former Special Forces Army Rangers who have been volunteering at her school go looking for her…

She took another drink and then he pulled the glass away. “Wait, baby! Let’s make sure that settles.”
She ducked her head and asked, “You think I’m a baby?” She didn’t know why that hurt, but it did. […] Then he used his knuckle to gently tip her chin so that she was looking up at him.
“I think you’re my baby, mine and Caleb’s. You’re ours to take care of.

Leif isn’t winning any personality awards either – he has held over a lot of his hard traits from his days as a Major in the Army.

Leif spends a great deal of time being overly frustrated with Isabella’s actions, and Caleb calmly talks him down…

Every time he thought he had plumbed the depths of Isabella’s suffering, Caleb only seemed to break through to yet another level.

Caleb is a much more friendly and outgoing personality than his partner. He actively tries to smooth the path to he and Leif’s ultimate goal:

They’ve been volunteering at her school… Barely interacting with her, but waiting for the opportune moment to breach the subject with her…

Isabella is a child in a twenty-six year old’s body.
What she needed was some friends and a good bit of therapy.
She received two men nearly twice her age who continued to treat her like a child – well, when they weren’t fucking her…

I don’t usually push the dynamics of real life D/s relationships on fictional characters, but pressuring that girl into being a sexual submissive – despite her minefield of triggers – was irresponsible at best, and completely killed the mood.

“Isabella, why did you want to go back to your apartment today?” Leif asked calmly. She looked at him and put down her coffee. He didn’t look calm. She couldn’t read him.

“I’m a lot of things.” He looked at her. He just kept looking at her. “When Sam told me you wanted to go back to Snoqualt, I was definitely angry, but I was also hurt. You were just not going to be here when we got back?” He didn’t sound hurt. He sounded angry. Oh God, he was right. How could she have even thought of leaving them without talking to them about it first? She looked around wildly, checking that all the plates and cups were on the coffee table, and launched herself at Leif.

“I was scared.” She grabbed at the front of his shirt and relief crashed through her when his strong arms enfolded her. Isabella moaned as Leif threaded his fingers through her hair, pulling at her scalp, urging her face up, so that her mouth was perfectly angled for his to slam into it. The kiss hurt and healed, filling a need that had been building within her all day. She tried to edge closer, but he pulled her head back further, so that her throat was arched. He lifted his mouth, and looked down at her, his eyes glittering like diamonds.

“This is as real as it gets.” Leif reached down, and pulled the red sweater free from the waistband of her skirt. It was over her head before she had a chance to blink. Her hair flew about in a storm of static. Her breasts were heaving. “This has got to go.” He used both hands to rip her bra apart and pull it off her. She felt a flood of cream rush from her vagina to coat her panties.

“Jesus, Isabella, I can smell you.”

“No!” Covering her breasts, she started to pull up her legs, because he must have smelled the scent of her arousal. As she rolled off the couch, he spread her out beneath him in under a second. She was pinned looking up at him, her arms in one of his hands above her head. Her skirt rode high up on her thighs with one of his legs shoved between them. She undulated closer to him while he squeezed her left breast in his other hand.

“Stay still! Don’t move!” He squeezed her breast a fraction tighter and she moaned at the wonderful feeling. Then softer, sweeter, “Don’t you dare move, Isabella,” and Leif released her hands. He sank down and their lips met in a tender kiss, then he moved ever downward. His one hand remained on her breast, teasing her nipple to a peak of arousal, as his mouth suckled the other nipple, when she arched up. He stopped. “No, Isabella.” Again his words were silky. “No matter what, you must stay still. Can you do that for me, girl?” She sucked in her last deep breath.

“My good girl. Mine,” he whispered through his beautiful smile. His hand and mouth left her breasts, and soon her skirt was lifted and her panties were torn like her bra. He grasped her leg that was next to the back of the sofa, pushing it up and up and up until her heel was hooked over the edge and her other leg dangled off the side.

He looked up at her. “You tried to leave me, Isabella.” He used the voice of an angel. He pressed in, and then spread his fingers and slowly tried to pull out. The feeling was painfully sublime. She disobeyed him, clenching her internal muscles trying to keep him. Or was it to just increase the wondrous sensation?

“Bad girl.” Nooo. Not bad. But he was smiling. She could see she had pleased him. Leif shifted, and then his chin lowered, glistening gold with two days’ growth of beard. The sound of her teeth snapping shut echoed through the room, as his golden bristles met the thin skin of her engorged clit. She let out a long whine, a hum that mixed with the wet sounds coming from her sex as he slammed in and out, his fingers thrusting and spreading and twisting.

Then she exploded. She was arching, she was screaming, and before she could even breathe she found herself hanging upside down. She found herself on the bed before she even realized that she had been carried over Leif’s shoulder. Her skirt was yanked off and Leif was naked and sheathed in a condom, and then he was thankfully on top of her with her legs draped over his arms.

“What?” What was he asking? Why was he making her wait? Was she supposed to be still? She slammed up to partially envelop him, but he made no move. “Leif, make it better,” she begged him. “I’m sorry I was going to leave. I was scared. I’m still scared. Please make it better, please just be in me and hold me.”

“I can do that, baby. I can do that.” He gently slid the rest of the way in, until he was nestled into the back of her channel. She could finally breathe again. When he started to draw back, she gripped strongly at his arms.

“Please, I’m sorry I was going to leave, don’t leave me.”

“I just want to love you, Isabella. I’m not going to leave you.” She searched his crystalline eyes. They were ocean-blue now, not the hard blue of diamonds. She relaxed. There was a cadence to his movements that brought them both unimaginable comfort and pleasure. He took her higher and higher, and she pushed up and up, glorying in the slapping of his balls against her anus. Each impression anchored her in the now, assuring her that this was real, that she was being loved by the man that she would die for.

Caitlyn O’Leary was raised in a small town in the Pacific Northwest. She has been an avid reader. Her earliest creative writing endeavors consisted of “ghost writing” exercises in which she pretended to be her younger brothers and sisters when she did their homework assignments before they turned them in as their own.

Years in corporate America honed her ability to manipulate words by day, and at night she read everything she could get her hands on, including many, many steamy romances!