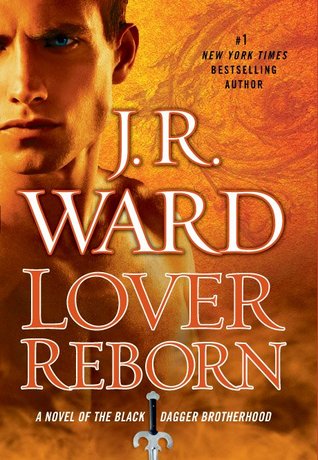 Ever since the death of his shellan, Tohrment has been a heartbroken shadow of the vampire leader he once was. Brought back to the Brotherhood by a self-serving fallen angel, he fights again with ruthless vengeance, unprepared for a new tragedy. Seeing his beloved in dreams—trapped in a cold, isolated netherworld—Tohr turns to the angel Lassiter to save his former mate. The only way to rescue her is for Tohr to love another. As war with the lessers rages, and a new clan of vampires vie for the Blind King’s throne, Tohr struggles between an unforgettable past and a hot, passion-filled future. But can his heart let go and set all of them free?

Tohr’s loss serves as the catalyst for his struggling brothers…
The BDB rallies behind their king, their cause, and each other…

Man, destiny sucked ass. It just had to barge in and piss all over everyone’s rose garden.
And now it was taking a shit in the other flower beds.

Before we get started, I want to make sure I sing several praises of this book, because it was not all fun for me…

There was a lot more laughter and witty dialogue from the Brotherhood in this Novel. that kind of easy banter was lacking in the previous books, and it was a pleasure to see it here.

No Scribe Virgin,
No Lesser POVs,
I’m loving the incorporation of the Band of Bastards into the War.

We also had a triumphant return of focus on the Blind King. I was reminded of all the reasons I love that badass Wrath. All of that strength, honor, and compassion… All the love he has for his queen and his dog – BTW: I still say we need to formally put an “h” in George’s name so he can fit in with the rest of the cast. Ghorge – Noble companion and seeing eye dog to the Blind King…

Now to the nitty gritty:

I’ve done something I’m not proud of with this book – I read it even though I didn’t really want to and I wasn’t at all excited about it.

That’s not really fair to the author, but its the honest truth. I’ve been unimpressed with he progression of this series for quite some time, but equally determined to make it through to the 11th installment.

I really just wanted to be able to read Lover At Last – the book about two characters I’ve come to love. Also, after reading Dark Lover & Lover Eternal, I purchased paperbacks of the first 11 books in the series – a mistake I have learned from, I assure you.

I was stuck between a rock and a hard place – was it better to skip a book in a series which weaves so many side stores into each narrative? Or to read a book I was completely unenthusiastic about?

I obviously chose the latter.
So please keep that in mind as you read my review.

I spent a great deal of the book making this face:

Because who was really waiting on the love story between the broken widower and Xhex’s nonentity mom? I couldn’t get invested in this romance… They certainly had my pity, but they barely had my interest.

It was hard to watch Tohr waste away in the mansion. Yes, we want to see these characters overcome obstacles and thrive… but Ward put Tohr in a seemingly bottomless black pit and continued to kick him for the first third of this book. It was gruesome. I’ve never been more thankful that we have the multitude of POVs and side stories to keep me from getting dragged down into his black hole.

I give great big allowances to grieving characters – much like real life, those suffering loss are rarely cognizant of those around them. They are stuck in their own world.

And for the love of the Scribe Virgin – Wellsie has been dead for less than two years, can we have the guy a fucking break? I hated that he was pushed to move on…

The Brother Tohr’s loss was so hearbreaking… The murder of his wife and unborn son at the hands of a Lesser had me crying real tears when the tragedy occurred several books ago. Tohr immediately went off the radar at that point.

He was purposefully wasting himself away in the wilderness, hoping that death would claim him so that he could join his family in the Fade. Fate had other plans for Tohr, however, and he was reluctantly pulled from the brink of oblivion by an Angel with an attitude – Lassiter (who remains one of my favorite characters of this series and has, by far, the best dialogue in this book) is determined to get him back on his feet.

By the time we come to this book, Tohr is strong enough to be on rotation with the Black Dagger Brotherhood again, fighting side by side with John – his adopted son – and Quhinn. However, he is not his old self, mentally or physically. He is surviving on the energy of revenge and justice for his Wellsie.

He planned to go on in that rage and grief-filled existence until he eventually died in the field. Considering his reckless actions, that end was fast approaching… Until the Angel Lassiter tells Tohr that his inability to “let go” of his dead wife is keeping her spirit from going into the Fade and having a peaceful afterlife.

The solution: Get back up on that relationship horse – and how convenient, there’s an unmated female living in the mansion with nothing better to do…

She ate like a bird. Was silent as a shadow.
And why she was here, he hadn’t a clue.
He had buried her in the Old Country. Underneath an apple tree because he had hoped the fragrant blooms would ease her in her death.
God knew she had had nothing easy at the end of her life.

No’One was curiously viod of any real personality. She blended in with the furnature, had no real likes or dislikes… She traveled from the Other Side to be with her daughter Xhex at the end of Lover Mine.

We’ve already been given all the back-story about how Xhex’s mother was once a treasured and pure daughter of Glymera. Known as Rosalhynda, she was kidnapped by a Symphath and Brother Darious took a very young Tohrment out into the field to find her. By they time to two rescued her from the clutches of her captor, she was pregnant with the Symphath’s young.

Her family refused to take their ruined daughter back, so Darious ad Tohr watched over her during the year of her pregnancy and subsequent birth. In the moments after Rosalhynda gives birth to Xhex, she pulls a dagger from Tohr’s belt and kills herself.

Tohr was devestated by the loss and Darious arranged for Xhex to be raised by a Vampire couple who lost a young. Meanwhile, her suicide means that Rosalhynda cannot go into the Fade. She arrives on The Other Side and pledges her service to The Chosen. She changes her name to No’One and spends the rest of her days in servitude… Until she shows up in the mansion with Payne and reveals herself as Xhex’s dead mother…

This book had a ‘Circle of Life’ Theme to it…

Everyone was reliving their own tragedies, losses, near-misses, and all the heartache which brought them to the current point in their lives.

Even though this story was supposed to be primarily about Tohrment & No’One, Tohr’s story was directly influencing John Matthew…

This book was heavy on John and Xhex – it was a little like reading Lover Mine II – John is trying to deal with the idea of Xhex being a badass fighter in the war. His fear is that he’ll loose her and wind up just like Tohr – a shell of a man without his Shellan. Of course Xhex can’t stand the idea of being treated like anything less than a warrior. The disagreement is tearing them apart.

On the other side stories:

We’re learning more about the entire Band of Brothers. They have several run-ins with The Brotherhood.

Over the course of this book, Xhex and No’One find common ground and begin to form a bond.

This was jam packed with action, emotion, angst, and drama… Just like we expect J.R. Ward books to be…