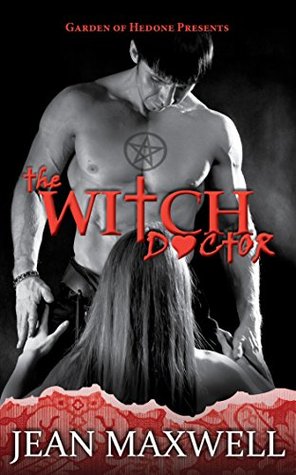 The Witch Doctor by Jean Maxwell
–
Source: Review by Request
Copy Provided by the Author
My rating: 4 of 5 stars

Where do witches go when they’re feeling a little poorly? To the Witch Doctor, of course.

Sexy, brilliant Valor McCaine is a warlock making his way in the modern world as pharmacist by day and witch-healer by night… sometimes both day and night! While his patients find relief in experiencing Valor’s formidable sexual prowess, his race is slowly being decimated by a sinister virus he has been tracking and researching for decades. Will a breakthrough ever come? Valor’s best chance walks through his pharmacy door one afternoon in the form of a young student named Darcy deHavalend, doing secret research of her own. Will they become partners or adversaries in a fight to save witchkind?

The Doctor is most definitely in…

…he felt utterly alone. No woman had shared his bed in any meaningful way since Artizia had died […] How many years ago now? He avoided trying to count them for they made him feel much closer to death himself. Since then, he’d devoted his time to his patients and to fighting the dreadful pandemic of the Némesati virus.

I was delighted to discover that this book was more plot driven than the blurb let on. I’m always excited to read books which are heavy on the sex, but it’s lovely to find a book which also pays close attention to what’s happening outside of the bedroom.

Val is a several-hundred year old Warlock who has been tirelessly searching for a cure to a ruthless virus which is decimating the modern witch population.

Darcy is attending college with a singular purpose – gain enough knowledge of chemistry and physiology to combat the mysterious malady which is swiftly crippling her mother and grandmother.

This unlikely pair teams up once they discover that they’re both battling the same virus. They’ll have to combine their skills and set aside their sexual attraction in order to find a cure before its too late.

Throw in an interesting cast of characters:
– A chatty house cat
– A Warlock with a serious grudge
– A young witch with a sex addiction
– A quirky old professor
– A jealous former lover

This book definitely surprised and delighted!

If you were to describe your book in only one word, what would it be?
Shocking.

What would you say inspired you to write it?
Campfires, and an old TV show called “Bewitched.”

What was the source of inspiration for Darcy deHavalend?
The name Darcy always fascinated me. I knew a girl in school named Darcy who was smart,
pretty and “perky”. Plus the alternate spellings it has, D’Arcy, which I think dates back a long
time. It fit with the “witch” spellings of my other characters.

How about Valor McCaine?
Hmmm…so many choices. I wanted a character who was of course handsome and well-built, but also brilliant, and a tad unreachable because of his intellect and tortured past. When I saw you post a vine of Colin Farrell in your review, my mind went to Robert Downey Jr. I’ve always
liked him, even though he’s such a rat, with a scathing badboy history. He fits!

Have you ever been hit by the infamous “writer’s block”? What did you do to escape it?
I talk to myself on paper…type a bunch of questions about how I’m feeling or about the story and characters.

Would you say becoming an author has changed you? In what way?
Absolutely. It breaks a barrier that you never thought you’d cross or didn’t know how to. I get a kick out of making my people, ie characters, look, act, think and talk exactly how I want them to. Something you can’t do with actual people, lol.

Was there ever a time, during your work for this book, when you felt like giving up? What made you change your mind?
Nope. It’s a labor of love.

What does your day-to-day life consist of? What else do you do, aside writing?
I work in the communications field currently, so I do get to write a bit in my day job. But I’m an artist at heart; I’ve drawn and painted and crafted things since I was born. My first career
was as a draftsman, so that science and engineering bent comes out in a lot of my stories.
Later I switched to graphic design and I still freelance at that. The cover art for The Witch Doctor
is my own. Music is a huge part of my life, so I’m also a part-time musician. I play clarinet in a local community orchestra.

How do you deal with bad reviews or acid criticism? What would you advise other authors to that effect?
Luckily I haven’t gotten a lot of ‘bad press.’ Any negative comments that go public I just don’t
call attention to. Always focus on the positive. If it’s constructive criticism, say from your
critique partners or beta-readers, then learn what you can and put it into action.

What do you have stored for us in the future? What are you working on/planning on next?
OOOh, that gets me excited! I have so many story ideas I worry I won’t get around to them all.
No plans for sequels to the Witch Doctor…he’s kind of a maverick. But I have a prequel in the
works for my Spanish Seduction series, and a spin-off involving some of its secondary characters which delves into the complexities of interracial relationships. Am also planning some shorter works to fill out my Workplace Gone Wild series and even some non-fiction reference-style titles under an alternate pen name. There’s also a music-inspired series that I began a few years ago and I feel bad I haven’t given it more love and attention. Maybe that will be next. After that, I have a sci-fi/paranormal plot line in mind that involves a certain woodland creature very common to my region.

What made you decide to become an Author?
I blame Chris Baty and NaNoWriMo! But it also goes back to a childhood friend who was an avid
reader. We competed to see who could read the most library books in a school year, and we
joked about how we would one day write books. We even chose pen names!

What would you say was the toughest part?
Getting over that goofy, cornball writing style we all seem to have when starting out. As you saw above, I’m not a writer by trade or training. Just something I’ve always wanted to do.

Did you hire professionals for editing, cover design, formatting?
I hired a writer friend to edit part of my first book, then my publisher assigned one to me after offering me a contract. They also provided the cover designs, which taught me what the industry expected as far as look and feel. My background in graphic design already gave me the knowledge about formatting so that wasn’t an issue. I plan to do my own covers with my indie titles. What I’d really like to hire out is translators…do you know any good ones who work cheap? Lol.

How long did the production part take for this book, from the moment you began working on the manuscript to when you hit ‘Publish’?
The manuscript was written in two phases with a big pause in between, in total spanned 15 months. But the bulk was done during NaNoWriMo last November. Then I set it aside while thinking about what to do with it. I decided to publish it independently in July of this year, so technically it’s almost 2 years!

Where is your work being distributed, Amazon, B&N, Smashwords, AREbooks/Omnilit, some other distributor? How did you decide which one(s) to go with?
My titles with Evernight Publishing (which is everything except The Witch Doctor) are available
at all the above in addition to their own site, evernightpublishing.com. I chose them based on their royalty structure and response time.

If you were stranded on an isolated island, what’s the one item you’d absolutely wish to have with you?
Paper and pens/pencils/crayons! I guess that’s two items, darn.

Coffee or tea?
coffee in the mornings. Tea in the afternoons!

Were you a Girl Scout?
Never.

Do you collect things, like stamps, or key chains, or shoes?
I have a nostalgia for oil lamps…mostly tiny ones. I have a really old one shaped like Aladdin’s lamp!

Favorite color, you know you want to tell us!
Sing the blues, baby!

Do you have a favorite quote or personal motto?
“Throughout history it has always been easier to destroy than to create. I choose to create.”

Born and raised in the True North Strong and Free, Janice believes she came out of the womb with a pencil in hand and began drawing at a very early age. A graduate of both the Northern Alberta Institute of Technology in Engineering Design and Grant MacEwan Design Arts program, she switched from draftsman to graphic artist in her early career. Suffering from a deplorable excess of creativity, she then indulged her urge to write that had been simmering since sixth grade, resulting in her first romantic suspense novel, El Mirador. The sequel, El Precio, then followed, along with two short stories in anthology collections and a contemporary romance novella entitled Indecent Proposal. Her most recent work, The Witch Doctor, released in June of 2014.

Janice lives in Edmonton, Alberta and works as a Communications Specialist for an energy services firm. She teaches night classes in desktop publishing and pursues freelance graphic design work in addition to playing clarinet with the Cosmopolitan Music Society and the New Edmonton Wind Sinfonia.