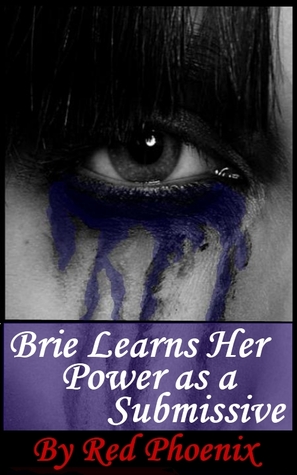 Brie Learns Her Power as a Submissive by Red Phoenix
–
Series: Brie #3
Source: Personal Library
My rating: 4 of 5 stars

Brie’s third day of submissive training is a hot sexy mess. She has no idea that her actions from the day before have serious consequences. Training becomes intense, stretching Brie in ways she could never imagine as the trainers determine whether she should remain in the program. In the midst of the turmoil, Brie comes to understand her true power as a submissive.

The novelette, Brie Learns Her Submissive Power, continues the sexual adventures of the Brie Bennett as she explores the Dominant/submissive world via The Submissive Training Center.

Ms. Clark is not happy with Brie’s performance after the second day and makes it her mission to put Brie in her place. Unfortunately, that is not the only issue. Others know of her intimate session with Sir after school hours. Such an infraction could tarnish the school’s reputation. Brie is about to discover new avenues of fulfillment – just not in the way she would have preferred. Her final practicum includes a passionate encounter with Marquis Gray, the ghost-like man with eyes that pierce the soul.

What a difference three little days can make…

“It is important that you understand the power you have as a submissive. It is not a case of you being inferior when you bow at your Dom’s feet. The reality is your Dom only has the illusion of power You are the one in control. You decide how far the scene will go. It is your gift to him or her…”

Brie wakes up on Day Three of her training with a whole new outlook:
She’s wearing Sir’s collar – if only for protection. She’s feeling more confident in her daily life and is noticing how her internal changes are affecting the people around her. She’s thrilled to start her new day at The Center, but isn’t prepared for the fallout resulting from her late-night tryst with Sir.

After only a few days of class, she already looked at herself in an entirely new light.

We’re still getting to know the Doms of the Center – this time we have a focus on Marquis Gray and Ms. Clark.

Before the end of this night, Brie will share her deepest fantasy and have to defend her right to continue at The Center.