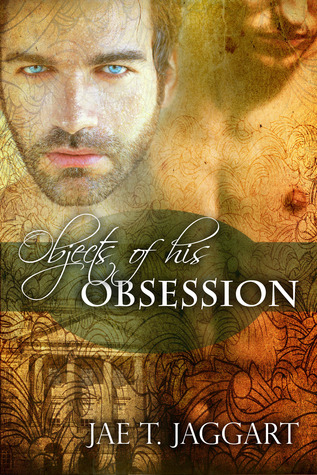 Objects Of His Obsession by Jae T. Jaggart
O
Source: Review by Request
Copy provided by Author
My rating: 4.5 of 5 stars

One of which has a definite pulse – the seductive and beautiful Evander St John, Duke of Casterwell. A man he has a certain history with.

A man who tells Benedict that he has spent too long amongst sand and dead things. He might not be wrong. Casterwell’s world is one of sexual sophistication and games that Benedict cannot hope to match.

But when Benedict returns from working on a famous dig in Cairo, Casterwell invites him to a country house party that will change his life. An Egyptologist of growing renown, Benedict will also catalogue the famous Casterwell collection of antiquities.

And almost certainly, will become one of Casterwell’s string of lovers. But will he be the one to break through that glittering façade? Or will the scars of Casterwell’s dark, bloody past and his complex and fiercely deceptive private life tear them apart?

What happens when infatuation is denied?
It grows into an obsession…

His twin obsessions were flowering, their thorns hooking under his skin yet deeper.
Egyptology. Evander.
One he had no wish to be free of… The other, must end.

I’ve come to a decision. While I rarely read Historical Romances, I am a total sucker for a well written MM Historical… And Jae T. Jaggart delivers with this fantastic book.

…the most beautiful man Benedict had ever seen. Naked and clothed.
That exotic beauty backed by an aristocratic drawl and a vicious intellect to match that could cut lesser mortals to shreds, should he choose.

Evander is a man who seems to have everything. In the glamorous world of Victorian England’s affluent social circles, he is known for obtaining everything he chases after… And it seems that he has set his sights on the naïve Egyptologist, Benedict Yeats…

At last, all those questions about himself answered. And he didn’t give a damn that they led him down a road away from society and a conventional life.
To be true to himself, his passions, his obsessions, was all he had ever believed in.

Benedict is a man who refuses to do anything half way. When he discovered his passion for Egyptology as a boy, he threw himself into his studies, eventually becoming a respected (if eccentric) expert in his field… And when he locked eyes with the enigmatic Duke of Casterwell as a student at Oxford, he became hopelessly enamored… Obsessed.

Jae T. Jaggart weaves a richly detailed world within this book… The cast of characters is every bit as enthralling as the time period…

On that note, I’d like to take a moment to talk about Evander’s wife, Juliana. I went into this book knowing that I’ve enjoyed the author’s previous work… But I was quickly knocked off balance when I discovered that one of the main characters was married. I was sort of expecting that the wife would be portrayed as frigid or scheming, but what I found in Juliana was an amazing, warm, intelligent woman who was far ahead of her time. Unfortunately for Evander, Benedict shares my opinion of Juliana, and the sentiment throws a wrench into Evander’s quest to seduce Ben…

“I respect her,” Benedict gritted, curling his fingers tighter about Evander’s wrist, drawing that hand away from his throat. “And I don’t care if you two have an arrangement or not. I cannot smile in her face in the daylight and be buggered by her husband by night.”

The good news is… Juliana has a vested interest in her husband’s romantic conquests, and in a time when arrangements behind closed doors are prevalent among the wealthy, Juliana has a few secrets of her own…

I’ll admit that I had a suspicion that the Casterwell marriage presented a convenient facade for two homosexuals during a time when such leanings were quite dangerous… It was still a lovely element and a fantastic reveal.

I would kill for a follow up of this story. It is a standalone, but I’d love to read what happens next… Always a sign of a good book. I’m left satisfied yet curious about the future of the characters…