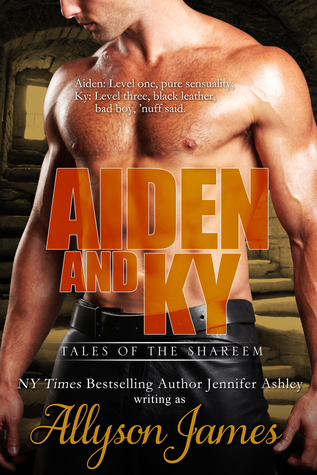 Aiden and Ky by Allyson James
–
Series: Tales of the Shareem #3
Source: Personal Library
My rating: 4 of 5 stars

Brianne, a woman of the ruling family, has never seen a Shareem, until she spies Aiden, a level one, in a coffee bar in the working-class part of town. Unknown to Brianne, her bodyguards arrest Aiden for even looking at her, and Aiden is locked away, scheduled to be terminated.

Ky, a level-three Shareem and Aiden’s closest friend, is furious. He tries to extract Aiden, which only ends up in him being arrested alongside him.

Brianne, horrified, has both of them freed, but Ky wants to teach Lady Brianne a lesson to make up for almost getting Aiden killed. Aiden accompanies him, worried about Ky’s volatile nature, and Brianne finds herself alone in a train car with two Shareem men who have many things on their minds.

The incident has Ky bothered for more than one reason—it forced the feelings he’s kept hidden for Aiden to surface. But such things are forbidden to Shareem, as he learned the hard way years ago.

With Brianne with them, everything seems to be fine. But when Ky starts to give in to the longing he’s had for years, old danger resurfaces, which he knows could mean the end of his life.

Ky had never been this aching before, even after teasing a woman without releasing himself. But the scent of Brianne covered in Aiden’s oil and the taste of her skin, the heat of her pussy had been good. So good.
Even better had been Aiden’s fingers caressing his as they both stroked her, and Aiden’s tongue hard in his mouth. The combination of woman and man . . . Ky had never felt anything so potentially explosive in his existence.

We knew from the previous book in the series, Rio, that Aiden had developed feelings for his best friend and fellow Shareem Ky. He was content to hide his feelings for his friend, but fate has different plans. After all, the threat of death is a pretty huge motivator to bare your soul.

“It’s forbidden,” Ky said automatically.
“If we never did what was forbidden, we’d all be dead by now.”

Aiden was quietly enjoying a coffee and making eyes at a lovely woman sitting at a table across the room. She’s obviously interested (how could she not be interested? He is a face-sculpted example of male perfection) but she quickly flees the coffee shop before he has the opportunity to seduce. Unbeknownst to him, Brianne d’Aroth was the mysterious beautiful woman, and her bodyguards took it upon themselves to have him thrown in jail for stirring up her emotions. He is scheduled for termination…

BRIANNE d’AROTH
Member of the ruling family of Bor Narga

Brianne is a member of the ruling family. A public figure engaged to a dull but equally powerful man. She has no intention of running off with the Shareem in the coffee shop, and left before her sexual feelings could override her common sense. She had no idea that the beautiful man had been hauled off and scheduled for termination. She uses her considerable power on the planet of Bor Narga to have him released, but not before making an enemy of Ky.

“You like to apologize.”
Brianne flushed. “You make me feel guilty. You’re good at it.”
“Only because I’m level three. The punisher. I want you to want your punishment.”

Ky and Aiden have stuck together for the past twenty years, and he’s not going to easily accept the apology of the High-Borne rich bitch that nearly had his best friend killed. He has a plan. Ky and Aiden will teach this woman what a Shareem can really do…

The three together are an explosive force. It’s not long before reality comes crashing down on them all…
Aiden must reveal his true feelings for his best friend.
Ky struggles to process his growing attraction to Aiden.
Brianne must navigate a way to enjoy her Shareem in a world where they are the lowest caste of society, and she is firmly at the top…

I’ll be honest, once Ky and Aiden begin to explore their growing relationship, I found Brianne to be fairly superfluous… I’m a fan of M/M Romances and would have been perfectly happy to drop the trio to a duo. That being said, when this book was first published in 2007, there weren’t a lot of M/M Romances written for a female audience, especially ones which take place in the middle of a series featuring M/F relationships…

But I’m certainly fine with it 🙂