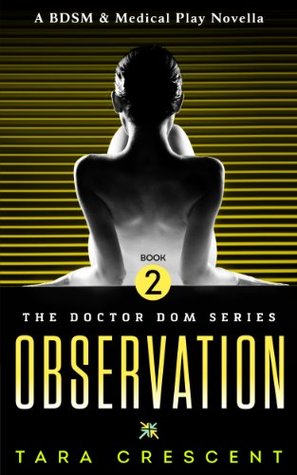 There is an eight month period in my life that I do not permit myself to think about. The eight months of my life when I was Nick O’Malley’s sexual submissive.

And then, things started escalating in a way that I was powerless to resist.

I recognized the look in Patrick’s eyes today because I’d seen it before. I’d seen the same look in Nick’s eyes for eight months – a certain focused intensity and a calm control, before he began to steadily strip apart every little bit of who I was, every little spark of personality, to create a sweet, willing submissive instead.

When I finally summoned the courage to break my terrible addiction, I made a promise to myself. No more. I’d play my spanking games, and I’d play at submission. But I could sense dominance in men, and I avoided it; I had determined that I was not strong enough to survive again.

The look in Patrick’s eyes took me back to that dark time. And I was adamant I wouldn’t go there again.

***Patrick and Lisa continue to see each other, but they are both keeping secrets; secrets that could tear them apart. How long before they find out what the other has been hiding?***

The second installment of the Doctor Dom series increases the kink factor, the emotional connection between the main characters, and leaves off with a rough cliffhanger…

By submitting to his desire for control, I had laid myself bare before him. Naked. Trembling. Fearful. Oddly hopeful.

Book two picks up right where Triage left off. It packs in some hard-core kink which will make you squirm and blush. The medical kink is a major factor in their playtime, as well as spankings and some domestic domination… And lots and lots of sex!

However, it’s the focus on the characters themselves which make this installment so successful. Their relationship is moving beyond the sex (but thankfully not insta-love) an honest, friendly, and compassionate relationship is beginning to bloom…

I was on the brink of falling hard for this girl; falling hard and deep and willingly. She was perfection; she was honest and open and trusting and brave; and I wanted everything she had to give.

I had no control; yet I had all the control in the world; I was an expression of Patrick’s imagination; but I brought something unique to his scene; I brought myself; my true expression of submission; my honest, unfiltered lust.

We’re learning what brought each character to discover pleasure in a D/s relationship… But we’re also getting glimpses into why they’ve independently sworn off that type of connection… While the dual POV is giving the reader a glimpse into these issues, the couple is refusing to disclose the extent of their pasts…

My main complaint about this book is that THE CHARACTERS AREN’T TALKING! I know I should probably shut my mouth, because if they jumped right into that conversation in book two, the story probably wouldn’t be continuing… So there’s nothing left to do now but impatiently wait for the next installment!

“Miss Preston,” Patrick greeted me at his door. I was dressed casually, since I was aware the clothes weren’t going to stay on for very long; jeans and a t-shirt; a hoodie thrown over it. Even my lingerie underneath was plain; a simple grey cotton bra and panties. Functional clothes; I’d be taking them off shortly.

“Go on to the examination room please, and change into the robe,” he said. “I’ll be along in a minute.”

“Yes, Doctor,” I said obediently, and made my way upstairs. My hands were shaking; my entire body was tingling in anticipation. Standing in the middle of the examination room, I forced myself to take several deep breaths before I stepped out of my clothing, and into the almost-transparent robe.

He had warned me when we talked on the phone Monday that today would be intense; he had insisted on a safeword. Red. I kept it simple. He wouldn’t tell me anything else; laughing and refusing to ruin the surprise. I changed into my robe on autopilot while reliving the memory of our conversation Monday, and I realized I was smiling. Fuck. Three dates, a couple of phone calls, and I was seriously hooked. This was trouble.

I sat down on the stool, the metal cold against my bare ass, and I waited for him.

A knock, and he entered. He looked gorgeous; he was wearing his white lab coat, and under it, a blue shirt and grey slacks; I wanted to rip it all from his body; and take his hard length in me; I’d been fantasizing about Patrick since Sunday.

“Safeword?” he asked, searching my eyes for any hint of unease.