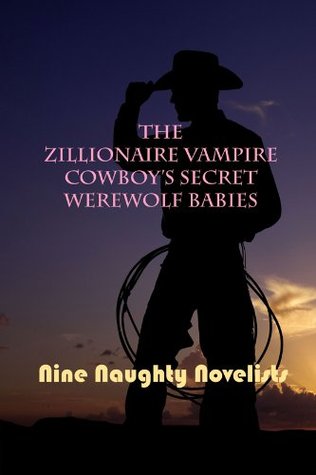 Theirs was a love that nature never intended. Bigger than Texas. Hotter than Hades. Weirder than…a lot of other things you might have read about up until now.

Self-made zillionaire Rock Fangsworthy is your typical Texas cowboy. Well, sort of. Typical in that the only thing this lethally sexy lady-charmer with the hair trigger temper loves more than his horse is his ranch, The Double Fang. Or maybe his boots. Less typical in the fact he’s also a four hundred year old vampire with a shocking secret: he can’t stand the sight of blood.

Buffi Van Pelt is just your average girl-next-door winery owner–or is she? The spunky single mom to twin boys also happens to be a winsome werewolf with secrets and troubles of her own. The winery that the gutsy good-girl recently inherited from her grandmother is on the verge of ruin.

If Buffi can’t find a use for the mysteriously tainted wine before time and her pantry’s limited supply of red meat runs out, she and her pups will be left homeless, destitute and very, very hungry. Worse yet, her baby-daddy is the same hunky, bad-boy vampire rancher who’s out to steal The Best Little Winery in Bloodsuck from under her paws.

Once upon a time their passion flamed hotter’n a summer’s night in Dallas with three Cheerleaders and a side of habanero sauce. Tonight, love’s lightning might just strike them twice–but only if the wine don’t kill them first.

I’ve heard that laughter is the best medicine… If that’s true, I’m officially as healthy as the horse Rock Fangsworthy rode in on. I laughed constantly & loved every ridiculous moment of this absurd book!

It feels good when a book exceeds your expectations!
This book is written by a collective of authors known as the Nine Naughty Novelists, the authors took turns writing full chapters and I can only imagine how much fun it must have been for them to pass their work around to each other… I’d like to take a moment to share the Warning listed at the front of the book:

Warning: The book you are about to read is a parody. Any resemblance to serious literature is accidental, unintended and should have been excised by the authors prior to this point. Readers who attempt to find a deeper meaning within these pages put themselves at risk of developing Brain Cloud, Brain Fever or, at the very least, serious confusion and existential despair. Read responsibly. Prepare to laugh.

This is like the book equivalent of a cheesy B-Movie. I got the distinct impression that the authors were deliberately attempting to pack every paranormal romance cliché into 116 pages. Mission accomplished! There’s a lot to talk about, so let’s get started.

Rock Fangsworthy
A Zillionaire Vampire with a fear of blood, owner of the Double Fang Ranch

Rock Fangsworthy was a man of action—gruff, manly actions like boldly striding across rooms and menacingly narrowing his slate-blue eyes.

Buffi Van Pelt
A Werewolf, owner of the Best Little Winery in Bloodsuck, and mother of Rock Fangsworthy’s secret twins

When he kissed her like this it set off a firestorm of lust and longing deep inside her. Not an actual firestorm, of course, just something that felt like one without all the messy burning, charring smokiness that would have accompanied the real thing.

Chastity closed her eyes and counted to ten, which was about as high as she could reliably go without dollar signs…

“We belong together. It doesn’t matter to me if you’re as sharp as a cue ball or have slightly uneven boobs or that your master plans are about as useful as a trapdoor on a canoe.”

How awesome are those names, by the way? All of the characters in this book are over-the-top caricatures of the folks we typically meet in Paranormal Romances, and they’re perfectly crafted in their silliness and interactions. The sex in this book was equally lampooned, the authors took the time to carefully spoof the sexytimes we’ve come to love with awkwardness and absurd euphemisms. Speaking of which…

I’m only listing some of the laughable moments, because we would be here all day otherwise…
(For Sex)
his mighty tool plowed her tender furrow,
playing Ride the Fangy Stallion,
(For a Vagina)
passion chamber,
throbbing lady softness,
(For a Penis)
manroot,
icy lovecicle,

Yes, I loved every single stupid moment of this book, and I even gave it FIVE STARS which is rare for me… Read it. Love it. Tell me all about it!