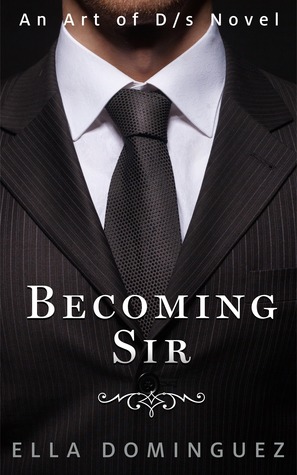 Series: The Art of D/s (Spinoff)
Source: Personal Library
My rating: 4 of 5 stars

Reliable, trustworthy, loyal to a fault – Sawyer is the kind of man other men want to be; a real man’s man. But behind the facade of a his tough exterior and deadly silence hides a strong, tortured man with dark secrets. Always content to be in the shadows, now is the time of his sexual awakening.

But the dark past and his heinous actions are hard to forget and even more difficult to leave behind. Will he be able to move forward and become the man he yearns to be?

This is Sawyer’s journey into becoming Dominant, Master, Sir.

Sawyer’s quest to become a Dom is an entertaining, thought provoking, and incredibly sexy journey which both compliments and continues the D/s Series…

…a Dom is generous, loving and respectful to not only his submissive, but all women. He is gentlemanly in public, but playful in private and a savage in the bedroom.

Sawyer begins his training under the watchful eye of Dylan, Isabel, & Kerian (owner of Dark Asylum)… While he takes to Dominance quite proficiently, he struggles with his past and with the three women in his life.

He detested what Sonya had done to him – to make him feel again; to love again. When Serena had died, so did all of his feelings.

“I’m no mystery; I’m just a simple woman with complex fantasies and fetishes,”

Sara is a submissive handpicked by Isabel to assist in Sawyer’s training. She has recently returned to the Dark Asylum club after morning the loss of her husband & Master…

“…I need to be used. I know that sounds degrading, but I’ve made that choice of my own free will and I give myself to only those worthy of my complete submission and slavery…”

Ciara is a slave in training under the guidance of Kerian. She spends time on loan to Sawyer during the course of his training so that he may experience the Master/slave dynamic…

Since Becoming Sir was primarily about accepting your choices in life, is there anything you want to add, Lady Gaga?

I’d like to take a moment to thank Carla for gifting me with a copy of this book!

An autographed copy of Becoming Sir (with a deleted scene!), “Book Whore” (yes, that’s definitely me) canvas bag & lanyard, a lovely “keep and open mind” key chain & note, an eBook of This Love’s Not for Sale, plus stickers, magnets, and bookmarks!