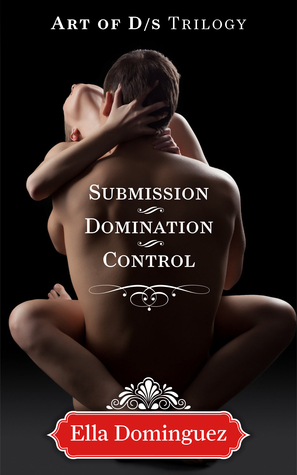 The Art of D/s Trilogy by Ella Dominguez

Series: The Art of D/s
Source: Personal Library
My rating: 4 of 5 stars

Isabel is a shy artist with an abusive past who has a very vivid fantasy life and unexplored unusual sexual tastes. When her very private and naughty-natured artwork is sold without her permission, she sets out to try and retrieve her precious paintings, unaware that the buyer has dark sexual tendencies.

When the two meet, Dylan immediately picks up on Isabel’s submissive nature and hatches a wicked plan to teach Isabel about his alternative lifestyle. He wants nothing more than to get his hands on more of her paintings and to dominate the submissive beauty.

This is the tale of their love for each other, their unbreakable bond, and their trials in a world that offers nothing but obstacles. This is the saga of two dynamic characters whose personalities collide as they struggle with their dominant and submissive tendencies and seek control in all things as their pasts come back to haunt them in spectacular fashion.

I’d like to share my overall impressions of this series, then encourage you to visit the links at the end of this post for the full reviews on each book…

The infusion of humor keeps the whole series grounded…

This is the first series I’ve read where we have a true Switch – someone who fully embraces the role of Dominant or submissive depending on the scene. Occasionally I read a story where the submissive turns the tables for a single scene, but the characters in the D/s Trilogy are in a relationship which allows both partners to take on the role of Top on a fairly regular basis. This adds a unique element to their dynamic, as well as their personalities. Neither character sits firmly in their established role. They are growing into their relationship together.

The inclusion of the mesmerizing artwork (from artist, Rebekka Ivacson) enhances the story and gives insight into Isa’s personality. After all, Isa is an artist, so her artwork represents a window into her tortured soul…

MOST IMPORTANTLY, THIS COLLECTION IS CURRENTLY 99¢ ON AMAZON! GO BUY IT!