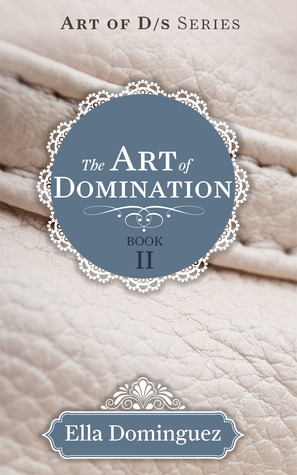 The Art of Domination by Ella Dominguez

Series: The Art of D/s #2
Source: Personal Library
My rating: 4 of 5 stars

Five months into their intensely physical and BDSM-laced relationship, Dylan is ready to make a lifelong commitment to Isabel. But Isabel has reservations and for good reason as Dylan has continued to remain secretive and closed off about his past.

When someone from Dylan’s past makes an unwelcome appearance, he is forced to confront his demons head on as he is threatened with exposure about his sexual proclivities. More concerning is the threat of exposure about how his parents’ death rests on his shoulders. Forced into an awkward situation, Dylan must help the former lover and ex-submissive who threatens to expose him, all while trying to keep it a secret from Isa.

Dylan and Isa embark on a new journey as they take vows to never let anything tear them apart, a journey that tests Isa’s physical and mental limits as Dylan lets his true Dominant and sadistic nature out, giving Isa more artistic inspiration than she ever thought possible. But can Isa keep her own Dominant nature at bay long enough to allow Dylan to fulfill his sadistic fantasies?

With Isa’s upcoming debut gallery show and just when things are heating up, their relationship is threatened when Isa comes face-to-face with Dylan’s past activities with his ex and a woman from his past who won’t let him go.

To make matters worse, Isa’s father tries to force his way back into her life and she finds out just how truly cruel he really is as his secrets are revealed.

With everything that comes to light, can Isa stay true to her vows of for better or worse?

“There are far worse people than you and I in this world and being a little dirty minded never hurt anyone, so fuck anyone who has a problem with it.”

I had firm words to say about the first book in this series, and I’m here to tell you that continuing this series was my absolute pleasure. Every issue I had with the first book was nonexistent here, and has been wiped from my memory by the outstanding writing from book two. The continuation of Dylan and Isabel’s journey was an edge-of-your-seat-while-squirming triumph.

Dylan on why he thinks he became a Dominant:

“It’s hard to put into words. It makes me feel wanted and needed, like a God, and like I can accomplish anything. I like the trust that’s given to me when I’m in control. It’s because it’s who I am.”

Isa on why she thinks she became a submissive:

“I like being under your control and pleasing you. I like the feeling of surrendering myself to you and the trust we have that comes from that. I already told you that my curiosity for sex like this came from the lack of excitement from vanilla sex, not for any other reason…”

There was just so much more to this book:
More honest love between the Dylan & Isa,
more character development,
more action and intrigue,
more suspense…

I stand before you completely blown away…

I absolutely loved it, and I’m thrilled to be moving on to Book Three!