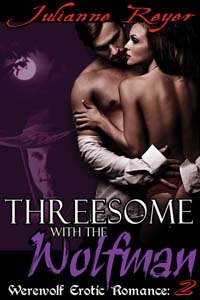 Lacey dreams of the woods, and of strange and wild encounters. She’s torn by her newfound power, and the secrets she’s keeping from her loving husband. When a handsome stranger appears at their door, she finds the facade crumbling and her primitive urges taking over.

Although this book was slightly better than Married to the Wolfman, I still feel trapped in a world of crazy with these books…

Dear Lacey (wife who is telling the story),
You are obviously a werewolf. Quit being an idiot. Its not mysterious; its obnoxious and it makes you seem incredibly stupid.

Why are you still not telling your husband that he’s a werewolf… and why can’t he figure that you by himself by the way? He’s a researcher. He’s smart, and analytical… What gives?

So… you suspect that your “dreams” where you’re a “wolf” might be a little more real than you think. And you’re pretty sure your husband murdered a guy, and brought back his cowboy hat…

The owner of the cowboy hat shows up at your house, and your husband assumes you’re having an affair. In order to diffuse the situation, so do the smartest thing I’ve ever seen you do…

So you’re going to screw both of them until they turn into uncontrollable murderous beasts? That’s the plan?

You’re an idiot. You deserve to get attacked by that wolfpack in the woods. You make poor decisions.

P.S. This book has taught me that maybe I should refuse to finish bad books occasionally. I’m grateful that these were mercifully short.