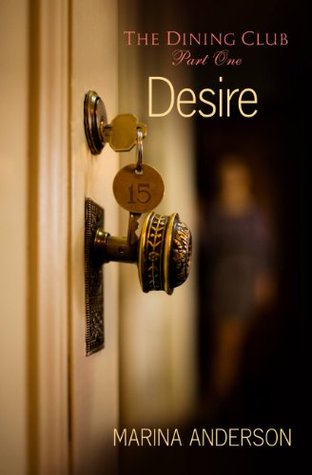 Young, ambitious theatre director Grace has no time for distractions, but she just cannot resist enigmatic city financier, David. Alluring, charismatic and an incredible lover – David never lets Grace get too close. So when he invites her to a weekend at his private club, Grace is thrilled.

Arriving at the secluded location, and excited by her nerves, David reveals the truth behind the Dining Club: a place where guests are taught to open their minds, and their bodies to erotic challenges. If she passes the tests, she is promised ecstasy beyond her wildest fantasies. If she fails, she’s forbidden to ever set foot in the exclusive club again. But even as David’s seductive commands make Grace feel more daring than ever before, she begins to fear for their future. What if she fails one of the Club’s tantalizing trials? Will David still want her or will she lose him forever?

The first installment of The Dining Club series is a short (35 page) teaser to get the reader interested in continuing the series. Alas, I remain unhooked.

“This club isn’t really a dining club, It’s a club for people with specialized sexual needs and desires. They come here so that they can enjoy themselves safe in the knowledge that they’re surrounded by like-minded people.”

To be fair, it is an interesting premise, and I can see how this series could be amusing, especially with David’s pillow talk:

“I only want to please you, darling.”

However it fell short for me.

Here’s why I remain unmoved:

First, with a mere thirty-five pages, everything must be crisp and perfect if you hope to dazzle the reader enough to move forward. Unfortunately there were two glaringly obvious mistakes.
1. In the first pre-coital conversation between Grace and David, the scene begins with both parties naked in bed contemplating a shower, yet ends in a car on the way back to Grace’s house. How did they get from A to B in the span of a short conversation?
2. Continuity. David alludes to “the other night in your flat, after you’d thought you were too tired for more sex” when that scene clearly took place at David’s flat. We never see further than Grace’s front door in the entire 35 pages of this book.

Secondly (and most importantly for me) the whole complication of Amber at the club and her interaction with David. It was too much too soon in a plot which didn’t need another twist yet. I’m sure that particular plot line will be a lovely addition to the rest of the series, but it immediately turned me off of Davids character to know that he had been cheating on Grace throughout their relationship, and was manipulating her into staying despite her misgivings.

This book series simply wasn’t for me, which is odd considering my previous enjoyment of various sex-club type books. If you feel the same and are looking for something better in this sort of genre, check out Submission the first book in the nine-part Plume Series. It’s free on iTunes, it’s longer, smarter, and you won’t immediately pity the female lead.