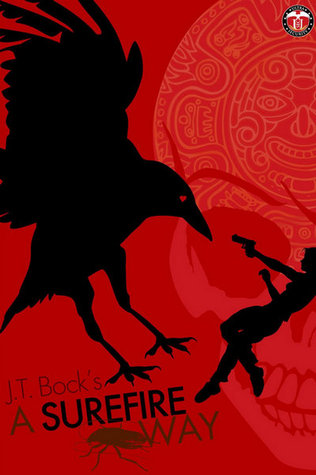 UltraAgent Surefire’s plan is simple: Capture the transhuman thief Raven. Win back the respect of her father. Get a raise.

Except Surefire just broke the number one rule of her employer, UltraSecurity, a niché security firm that solves crimes committed by genetically enhanced humans like Raven. She trailed Raven into a warehouse without backup. And something more powerful than any transhuman is waiting inside.

Raven’s plan is simple: Atone for his past crimes. Return stolen spiritual artifacts to restore the world’s balance. Don’t get caught by UltraSecurity.

Until a spunky UltraSecurity agent is suddenly on his tail, although Raven wishes she was on … well, never mind … he can’t get distracted from his mission. Because she’s followed him into a warehouse filled with his reclaimed relics, and Raven’s ex-partner in crime is about to unleash a supernatural-sized complication into his plan.

His old partner has accidentally summoned an Aztec god who will destroy the world unless Raven stops this spirit with a superiority complex. To do this, Raven must team up with Surefire and reveal the truth about his powers, exposing her to a force that can either save the world or destroy them both.

Following Raven into that warehouse throws Surefire into a surreal world filled with moody gods, day-glo skulls, dizzying dimensional portals, maniacal half-roach magicians, and a sexy thief who is more than he appears under his snug t-shirt. Is Raven a criminal, or is he working for a higher power? Surefire needs to be certain, because if she joins him on this mission, she’ll have to surrender everything she believed in for a surefire way to save the world, discover her destiny and find true love.

An endlessly entertaining ride from beginning to end!

The story wrapped up in a way that was satisfying for a stand alone piece, but I sincerely hope that UltraSecurity continues as a series. I will be the first to pick up book two.

I love the chemistry between Surefire (UltraSecurity Agent) and Raven (the most wanted art thief she’s tasked with bringing to justice)… The progression of their attraction was believable, the back-and-forth between the two was fantastic!

I even enjoyed all of the secondary characters (well, I didn’t particularly like several of them, but I appreciated the way they were written) I think there were enough quirky agents in the ranks of UltraSecurity to fill out a magnificent series.

Yet another book which I wish more people knew about…