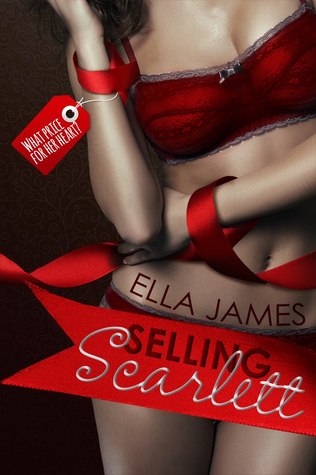 Elizabeth DeVille doesn’t belong at a party like this – one where the gowns cost more than her Camry and cigars run higher than her grad school utility bills. Dragged out of seclusion by her best friend Suri, Elizabeth is merely playing dress-up, rubbing elbows with a crowd that banished her troubled family years ago.

Hunter West is tired. Tired of parties, tired of pretending, and tired of trying to right a wrong that haunts him every day. Bourbon heir and professional poker player by day, by night Hunter is gambling with his life in a high-stakes game of crime and blackmail.

When Elizabeth stumbles into Hunter’s den of vices, she’s a light in the darkness, a flame in the void. And, just like everything he touches, Hunter mars her in a record time. To rectify the damage done, Elizabeth needs money she doesn’t have, and she’s come up with a foolproof way to get it.

Follow Elizabeth – code-named Scarlett – to the lush Nevada brothel where she’ll auction her virginity and risk the only thing that’s not for sale: her heart. The highest bidder is a familiar face, with wicked hands and the devil’s mouth. And a secret so dark that it could cost her life.

Selling Scarlett was like a psychotic snowball rolling down a hill – all awkward and unassuming at the beginning; easy to ignore, monochromatic white on white… Then to my surprise (and seemingly out of nowhere) it gained momentum. Unstoppable momentum. It rolled over everything in its path, leaving me wondering if that crappy little snowball at the beginning was really the precursor to the avalanche it became.

Alright, enough of the metaphors… This book was a lot of things… Or at least it tried to be a lot of things. It had several failings in my opinion, but once it hooked me (which took at least 1/4 of the book), I didn’t put it down. I stayed up until 1am to finish it.

It had some glaring mistakes that could have been caught with the utilization of a competent editor, but they weren’t too terribly distracting. In fact, I kind of got the impression that the first half of this book was written independently from the second…

In my experience with crime/thriller fiction, a proficient author will attempt to break up the tension every now and then, luring the reader into a false sense of safety before ratcheting up their anxiety once more. Generally this is accomplished through humor. Unfortunately, I found the humor in this book ridiculously, unbelievably, and unforgivably sophomoric in comparison to the subject matter.

“…I’m starting to get a serious case of belly bats (the unrelated more serious cousins of butterflies.)”

After taking some time to think about this book, I believe the lack of humor (or any other periodic pallet cleanser to the plot line) is what killed the book for me. It caused the whole work to lack a necessary balance. If a reader can deal with political corruption, kidnapping, murder for hire, prostitution, blackmail, and selling women into sex slavery, I promise they can handle some dark or dry humor. It occurred to me that perhaps the author was attempting to use sexy situations to break up the tension… if that was the case, we’ll need to add another failure to the list.

In addition to the problem with balance, there were way too many characters. Seriously. If a character is unimportant, and I don’t need to remember them for the progression of the story – if I’m never going to see their names again, consider calling them “two former FBI agents, a security adviser, and a PI” instead of telling me that “Theodore and William were in the FBI together before starting a private firm with Christoper. Jonathan joined three years later with a chip on his shoulder…” (For the record that’s not an actual quote form the book, just trying to make a point.) As I finished the book I noticed a big shiny advertisement for the next book in the series, and suddenly the hap-hazard character structure made sense – This book was a teaser for a series so the author was just trying to set up a few names which will (in theory) be flushed out later in the series.